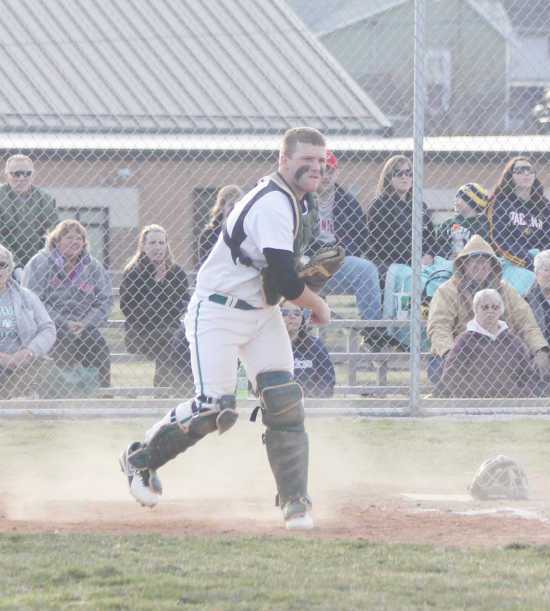 In a close ballgame in the sectional semifinal, Cloverdale senior catcher Austin Mannan watched as a long fly ball soared deep down the leftfield line.

There was a runner on third with nobody out in the fourth inning. The Clovers' offense was sputtering, so every run was crucial.

From 300 feet away, Mannan diagnosed that the ball would land a yard into foul territory and tried to yell for leftfielder Brody Pfaff to let it drop.

"Don't catch it; he'll that guy's going to tag," Mannan shouted. But the speed of the play and his mask muffled his voice and Pfaff kept sprinting after the ball.

It landed, just out of his reach, in foul territory.

When Pfaff threw the ball back in, Mannan took off his mask and repeated his command.

The run later scored and the Clovers lost, but everyone at the field got the message. Mannan was in charge.

"Austin took control this year as The General," Cloverdale coach Brian Archer said. "The catcher is supposed to be the extension of the coach on the field and I think he was that and more. There were several instances this year where he just took control. ... Austin's impact as a leader this year had a big impact on our season.

"You've got to have a senior leader like that and he really stepped up." 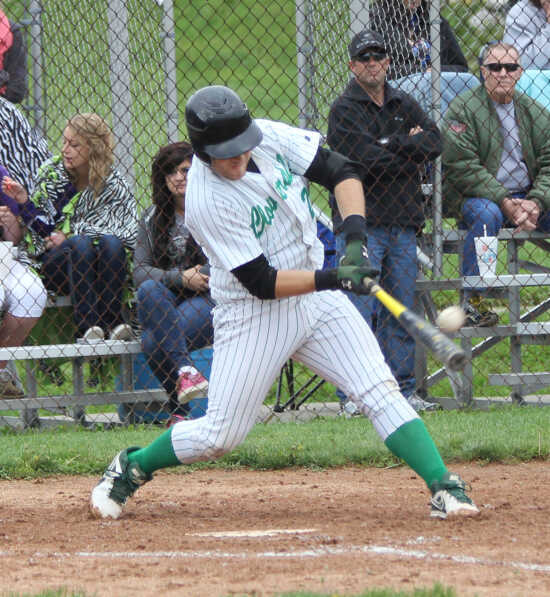 Mannan connects on a powerful swing during the Putnam County tournament this year. Mannan led the county in batting average, home runs, RBIs and slugging percentage by a wide margin. (Banner Graphic/GRANT WIEMAN)

As catcher, he helped guide his pitchers to a combined 2.27 ERA and his team won a school-record 22 games.

For that and more, Mannan has been named the 2013 Putnam County Baseball Player of the Year.

More important than the individual honor was the team's record win total.

"It's just unreal to think about," Mannan said. "People looked at us and said, 'They lost their whole outfield and their top home run hitter.' They didn't expect us to be anything.

"We got tired of hearing that and we went out and we played how we can play and we showed people that we weren't a pushover team. That people didn't want to mess with us because we would be them."

Mannan's impressive junior year put him on the Class 2A All-State honorable mention team. Somehow, that fueled him to get his act together.

"We started looking at colleges this past year and college coaches started talking to him about how the catcher is the general on the field, and he really took that to heart," Archer said. "I could see that coming last year as a junior because he kind of stepped into that role. He was a leader last year and he kind of knew that this year, as a senior, this was his team to help run and to be the go-to guy."

The work in the winter, spring, summer and fall paid off as Mannan was recruited to join junior college powerhouse Lincoln Trail College (Ill.) in the fall.

While the hard work was part of it, Mannan said his teammates are responsible for a lot of his success.

"One person doesn't win 22 games," he said. "It's a total team effort. ... Brody's catch against Monrovia in sectionals was huge. That was kind of the icing on the cake to a good season, when Brody made that catch." 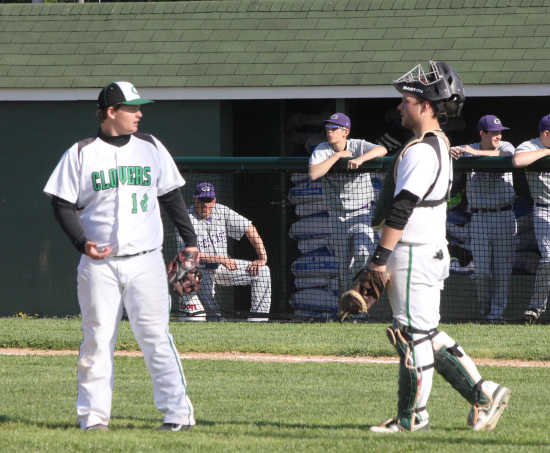 "(Pfaff and Cupp) hadn't played in three years; if they don't play we're probably an 11- or 12-win team," he said. "Brayden came in in the offseason and he's been a great addition for us. If Brayden hadn't been there all of our stats probably wouldn't have been what they were. We wouldn't have been a 22-win team."

While all the seniors were leaders, it was Mannan who inflicted his personality on the team.

He was a vocal leader on the field, Archer said, knowing situations and when to approach the mound, but more importantly he led by example, both during the season and throughout the winters of his career.

"(He's had) an unbelievable work ethic the last four years," Archer said. "The kid has done stuff on his own -- going to camps and going to showcases -- but in the four years he was in high school, in the morning workouts in the offseason and 6 a.m. practices, he missed maybe a handful. Maybe.

"His work ethic the last four years has been the most important thing to me. He's learned from older guys a little bit, and now he's shown younger guys that it takes that work ethic to get where he's at. He's just going to be a staple to the program. A poster-boy."

Mannan said the grueling off-season training was worth it.

"Those (6 a.m. practices) weren't fun, but they helped," he said. "Coach Archer helped me a lot. He stayed in and threw to me in the cage and put in a lot of extra time. Without (Archer and my hitting coach ), I'm not nearly as good as I am. I'm not player of the year. I'm not where I'm at without those two."

Mannan became a full-time starter at catcher midway through his freshman year and caught every inning of every game as a sophomore and junior. He got a few chances to showcase his glove in the infield during his senior season, but he is at home behind the plate.

He was aggressive taking chances and throwing behind runners, trying to control as much of the game as he could.

"It's weird to think about how much I've progressed as a catcher, because I played third base all the way up till seventh grade," Mannan said. "Whenever somebody gets on base, I try to make the pitchers job a little bit easier. Sometimes a team will get a guy on and they'll start getting momentum, but when you pick that guy off you end their momentum and you end their rally."

His knowledge of baseball and situations has grown to the point that when he and his coach get into arguments, it's usually Mannan who is right.

He has a photographic memory of events in games and can recite almost every play, every out, every pitch and every run that occurred throughout his career. 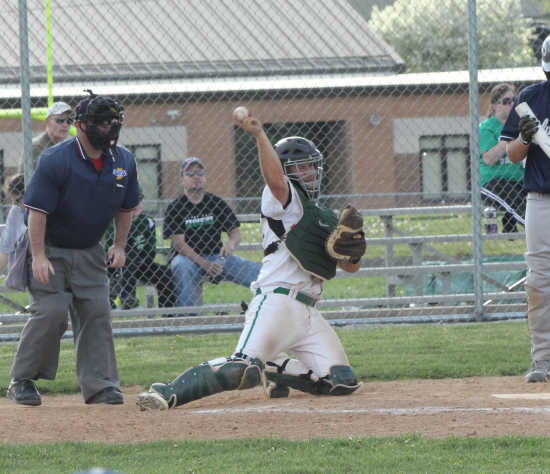 While that seems a bit trivial, it can help when the same batter comes up or the same situation presents itself.

"He was always talking to his teammates about the pitcher, about what he saw and what we can do to get an advantage," Archer said. "We kind of joke around now about it, but sometimes I would say it was one situation and he would say it was another situation. We'd argue about it and most times he was right.

"I think he used that. He has a great memory and he uses that stuff for the future. When we got into the later part of the season he could recall what happened in previous games and use it to our advantage. He's so into the game and so focused on the game."

One of the situations that kept coming up, seemingly a disproportionate amount, was Mannan batting with the bases loaded.

More often than not, no matter the pressure of the situation, he delivered.

"A lot of times in high school sports, the guys that are supposed to be the studs get into that pressure situation and some guys can handle it; some guys can't," Archer said. "Austin did a great job handling that this year. With our lineup, we got it to a lot of times big situations were in his three-spot and he handled that pressure pretty well and he produced.

"That says a lot about him, character-wise and as a player. ... When he was in the position, he just had a great approach at the plate the past few seasons and he knew what he could do with the ball. We talked about him letting pitchers make a mistake and him being more patient, and he did that."

Instead of fighting the moment, Mannan embraced it. His seven career grand slams tied a state record.

"The first walkoff I ever had was my sophomore year against Greencastle; it went 13 innings and I hit one," Mannan said. "After that, when I've been put in that situation, I've been rising to the occasion. ... Sometimes getting the bases loaded or pressure situations get my juices flowing. I like being in those pressure situations. I like knowing that the game is up to me and having the game in my hands."

He took each loss and each rivalry personally, learning from the failures of his team and the confidence he gained as a four-year starter.

That passion, and his desire to improve, will be on display next year for the Lincoln Trail College Statesmen.

"I told him, if he thought he worked hard for me for the past four years, he's in for a rude awakening," Archer said. "He's going to have a lot more to do over there, but I think he'll take the same work ethic and just become even better. My hope is that he goes to a four-year school out of Lincoln Trail. I know they do a good job of moving their guys on.

"Who knows where he's going to be in two years. But I think if he keeps the work ethic that he has, good things will happen to him."

Cloverdale's win total improved through each of his four years -- from 10 to 12 to 17 to 22 -- and though playing for a bigger, more successful school could have gotten him more attention and opened more possibilities, he said he wouldn't change a thing about his high school experience. 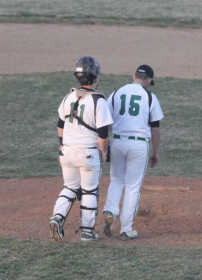 "I played baseball with Wilson and Nick, all those kids, ever since I was in tee-ball. Carter moved here in fifth grade. We're a pretty close-knit senior group that came up playing baseball. I wouldn't want to be on that history making team with anybody else but that team that we had this year."