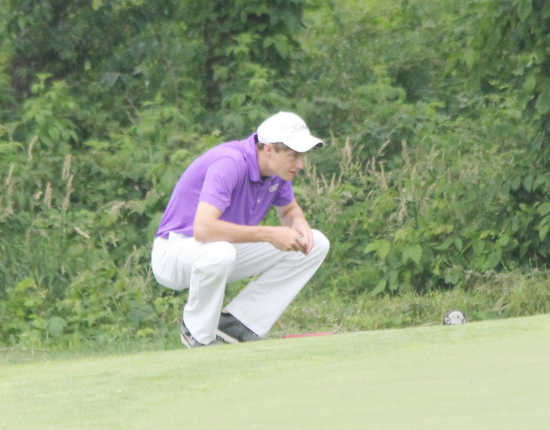 Greencastle junior Luke Brotherton crouches to read a putt during the regional match at Country Oaks (Washington) on Thursday. He finished third to qualify for the state finals. (Banner Graphic/GRANT WIEMAN)

Greencastle's Luke Brotherton completed his first practice round at The Legends on Saturday in preparation for the boys' golf state finals this week.

The Tiger Cubs junior will become the first GHS golfer to compete as an individual at the Indiana High School Athletic Association state finals on Tuesday when he tees off from the front nine at 8:09 a.m.

"Luke had a very good practice round," GHS coach Steve Paquin said. "He felt very comfortable on the course and hit the ball extremely well."

Brotherton qualified for the finals by shooting a two-under 70 at the Washington regional on Thursday, finishing the event in third place.

He'll have his work cut out for him at the state finals. All 100 golfers will participate on both Tuesday and Wednesday, with the lowest cumulative total becoming state champion.

He will be grouped with Zionsville junior Adam Wood, who was state runner-up as a freshman in 2011, and Madison Consolidated junior Carson Wattenbarger.

Dylan Meyer, last year's runner-up and the winner of the Washington regional in which Brotherton placed third, will be in the very next group.

Last year's winner, Evansville Harrison's Sean Stone, finished with a two-day total of four-under 140. The average winner for the past ten years has had a score of 137.5.

"Luke is well prepared and feels like he can play well and represent GHS and his team members in an outstanding way," Paquin said.

Brotherton will take one final practice round at The Legends on Monday.

Admission to the IHSAA state finals is $12 per day. Fans can also follow the action online at Golfstat.com.

The IHSAA will post the hole-by-hole scores for every player throughout the two days.

Tee times for Wednesday will be determined based on Tuesday's scores and posted on the IHSAA website, and BannerGraphic.com, when they become available.