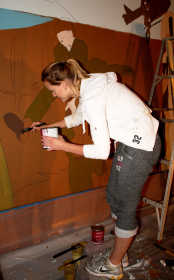 Banner Graphic/ERIC BERNSEE
Her vision beginning to take shape back in late April, fifth-year DePauw University student Lily Bonwich paints a soldier on the "Wall of the Brave" mural at Greencastle American Legion Post 58. The legion will celebrate Flag Day with a flag burning ceremony and the dedication of the mural at 7 p.m. Friday, June 14.

Greencastle American Legion Post 58 will celebrate Flag Day by unveiling a pair of new additions to the post on Friday, June 14.

The unveiling and first flag burning ceremony at the new burning grounds is set for 7 p.m., followed by the dedication of the new mural in the post ballroom.

The dedication of the burning grounds east of the building and inaugural burning will be performed by the Sons of the American Legion along with the Boy Scouts.

The Sons of the American Legion had the burn pit constructed this spring.

This ceremony will be immediately followed by the unveiling of the "Wall of the Brave" mural designed and painted by fifth-year DePauw University art student Lily Bonwich.

With a 7-feet by 45-feet canvas that "sets up perfectly for a timeline," Bonwich's mural depicts scenes of the armed forces over a period covering World War I through Iraq.

"The battlefield images are designed to represent the "better side of war," she said, rather than the death and destruction so often associated with battle.

The evening at the Legion will also include a dinner of fried chicken, mashed potatoes and coleslaw for $5 from 5-6:30 p.m.

The public is welcome to this Flag Day celebration. The post is located at 1401 E. Indianapolis Rd., Greencastle.