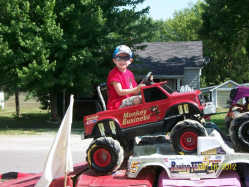 Courtesy Photo
Kaleb Borders or 'Monkey Business' as many close to him call him, was diagnosed with terminal brain cancer just last year. Krambo's will be hosting a motorcycle scavenger hunt and charity ride, which will benefit Kaleb and help relieve some of the medical costs.

Each year, the ride is put on to benefit someone in need and this year, the ride will benefit five-year-old Kaleb Borders, of Shelburn, who was recently diagnosed with stage four glioblastoma, which is one of the most common and aggressive malignant primary brain tumors.

Kaleb was officially diagnosed in February 2012. It is believed that he was born with the tumor that eventually grew large enough to affect him.

"He basically acts the same as he did before any of this happened," Standley said. "We've been lucky that he only goes to the hospital just for this treatment."

That was the case up until two weeks ago, when Standley thought Kaleb was coming down with the beginning stages of the flu. However, she later noticed that his breathing was kind of shallow and took him to the local hospital. He was then airlifted to Riley Children's Hospital.

"He was on the verge of respiratory failure," explained Standley. "We still don't know what caused it. They put him back on steroids for swelling in his brain. Ever since then, he's just been laying around the house."

Standley went on to say that her son has never let his cancer bring him down. Although, the most recent incident has put him on the couch, typically Kaleb acts like a normal five-year-old running around and eating fine.

"We've been so lucky that he's never really had any side effects from any of the treatments," said Standley. "It's basically terminal cancer. They say that they can't cure it, but they're trying their best to treat it."

Although, getting treatment every week isn't the ideal childhood, Kaleb keeps his spirits up every step of the way. Kaleb has had to undergo treatments, which have included chemo, radiation and MRIs every three to six months.

Just like most young boys, Kaleb loves to race, is obsessed with trains and his favorite movie is "Toy Story." He also has a love of monkeys, thus his nickname "Monkey Business" is fitting.

"He's eating, drinking and watching TV throughout the whole thing (treatment)," said Standley. "Every time they get done he goes 'thank you, I'm free!'"

The motorcycle scavenger hunt and charity ride will begin at Krambo's, 4248 W. U.S. 40, in Manhattan, with registration at 10 a.m.-noon.

"It's not a led ride," said organizer Beth Broadstreet. "We give them a list of items just like a regular scavenger hunt. For every item they find they earn tickets toward grand prizes."

All donations will go directly to help Kaleb and his family to help offset medical costs and travel expenses.

"The money is going to help offset medical expenses and to help make his time more enjoyable," Broadstreet said. "We try to keep it interesting for the participants. You can make it as child friendly as you need to. We tell them to go out and take photos and make them funny, mild, wild, rude or crude."

Scavenger hunt participants are asked to be back to Krambo's no later than 5 p.m. Following the hunt there will be a picnic style dinner, bike blessings and live music for all to enjoy.

If health allows Kaleb, will also be at the event.