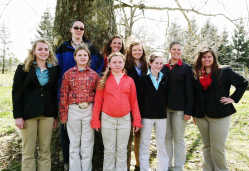 The Putnam County 4-H junior and senior horse and pony judging teams have had a busy and successful competition season.

The team began the season March 16, competing at the Western Boone Invitational Judging contest where the senior team placed fourth and the junior team captured second.

The next competition was April 6 at the Purdue Western Equestrian Team Invitational. The competition only ranked the top five individuals and did not place team competition. Senior member Emily Gilley placed third, while junior member Adie Clifford took fifth.

On April 20 the teams headed to Sullivan County for the Area Competition, where Putnam County dominated the senior division, earning top honors for the senior team and individual honors for Bailey Goff in first, Taylor Hicks in third, Emily Gilley fourth and Megan Arnold fifth.

The junior team held its own, placing third for the day with team member Whitney Boswell earning third place as an individual.

The seniors and Boswell qualified to continue to the state competition May 4 in Danville where Goff earned seventh place as an individual and was the second high finisher in the reasons division.

That was not the last competition for the group. Senior members will be going on to represent Indiana at the American Paint Horse Association Youth World Judging Competition in Fort Worth, Texas, on June 30.

Team members are currently working not only to prepare themselves for competition, but also to raise funds for the trip to Texas. They have had several fundraisers, including selling pizzas and setting barrels at shows held at C Bar C Expo in Cloverdale.

The group is seeking sponsors to supplement those fundraisers. Anyone interested in supporting this group may send donations to the Putnam County 4-H Horse and Pony judging team, 4010 S. CR 125 East, Greencastle.