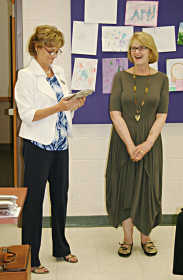 While spending a big portion of its June meeting honoring retiring staff members, the Greencastle School Board bestowed no higher honor than what it did for Gwen Morris.

The Deer Meadow library is now named the Gwen Morris Media Center in honor of the retiring principal.

Petitions signed by 180 residents had already been presented, and media assistant Janice Heavin also spoke to the board members to make the move.

"One of Gwen's big emphases is reading," Heavin said. "She's started I don't know how many reading programs for Deer Meadow."

Heavin's appeals were likely not necessary, as board members happily approved the request.

"Without a doubt, Gwen treats every child who comes through that building as if he or she were her own," board vice president Mike White said.

With 41 years of service to the corporation, Morris was the longest tenured retiree.

Superintendent Dawn Puckett took a few moments to honor each retiree, several of whom were in attendance.

"This group of individuals represents 294 years of service, which is huge for our corporation," board member Denise Sigworth said.

Another person completing his service to the school corporation was board president Mike Dean, whose term ends on June 30.

White reported that Dean was out of state on the day of the meeting, but that his fellow board members thanked him for his 12 years of service.

Dean will be replaced on the board by new Madison Township appointee Dale Pierce, who previously served 17 years on the board.

* The board changed the July meeting date to Wednesday, July 17. Central office staff requested the change because the regularly scheduled date of July 10 falls too close to the July 4 holiday to properly prepare financial reports.

* School lunches will increase five cents for the coming school year. Lunches will now be $2.45 for elementary students and $2.55 for middle and high school students.

* The board also approved a number of personnel items.

The board granted special education teacher Jennie Pryce a transfer from Tzouanakis to Deer Meadow. Gina Ames was also granted an unpaid leave of absence for the upcoming year.