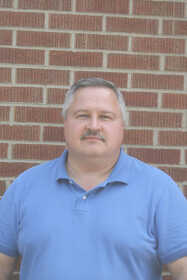 It hasn't taken the City of Geencastle's new water and wastewater superintendent long to get his feet wet.

On the job now, Robert "Rob" Lovell has been hired to succeed former utility superintendent Richard Hedge, who left the city's employment in mid-April to take a position in Indianapolis after supervising utilities here since 2010.

Lovell has already made a big splash in the city utility pond.

First came a broken water valve along West Walnut Street, a situation that not only required emergency repairs but necessitated a delay in the resurfacing work planned for the main westerly artery in and out of Greencastle.

"That valve was so old," Lovell told the Greencastle Board of Public Works and Safety Wednesday, "that the bolts holding it together were just gone."

In other words, it had to be replaced and pronto.

Before the ink on that work order was even dry, Lovell had a wastewater issue on his hands with a leak along Shadowlawn Avenue. It was caused by the age-old problem of tree roots invading the sewer pipe.

As he spoke to Mayor Sue Murray and her fellow Board of Works members Trudy Selvia and Thom Morris, Lovell aleady knew his next destination. He was headed to North Jackson Street to investigate a water leak on the site of the old car wash that used to sit alongside the liquor store.

Not that such issues are anything new to Lovell, who has worked for municipal water and wastewater utilities since 1986. He holds state certifications in wastewater treatment plant operations (Class IV license), water distribution (DSL) and drinking water operations (WT3).

His most recent position was with the town of Chesterton in northern Indiana for the past three years.

Prior to that, Lovell was plant manager of all drinking water facilities for the City of Carmel for 14 years, which followed three years in Arcadia and eight years involved in Cicero utility operations.

"So I've got a lot of history, a lot of experience hopefully making things run a lot smoother," he said.

In welcoming Lovell aboard, board member Morris encouraged him to look beyond his laundry list of what he sees must be done and put his experience to work focusing on future needs of the Greencastle community.

"You can only put a Band-Aid on it so many times," Morris stressed in urging Lovell to examine both facilities and the utility rate structure to assess future city needs.

The new utility director agreed, saying he would put together a needs assessment and corresponding budget requirements for any future plans.

"We can't do one without the other," Selvia interjected, alluding to a need to update and expand facilities and any rate structure effects understandably tied to such efforts.

In other utility-related matters, the Board of Works selected low bidder Joe Spiker Excavating, Greencastle, for the Ivy Tech lift station project along Zinc Mill Road.

Spiker submitted the low bid of $183,220 on the work designed to upgrade the lift station for future development in the area, including the impact of Ivy Tech and the apartment complex currently under way along the south side of Veterans Highway. Spiker's bid was a shade lower than even engineering estimates of $200,000 on the work.

The only other bidder on the lift station project was AVH Contracting, which submitted a $330,111 propsal.

In the only other business by the board, Spiker was granted an extension on the current project that is adding or replacing 4,060 feet of sidewalk and 54 handicapped-accessible ramps around Greencastle.

The original deadline for completion of the sidewalk work was July 1. As of Thursday, 900 feet of sidewalk remained to be completed. The new deadline agreed upon is Aug. 1.