Alice Greenburg to retire as director of library 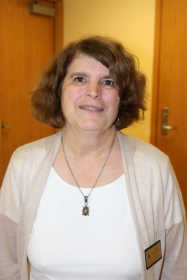 After 12 years at the Putnam County Public Library, Director Alice Greenburg announced during the library board's monthly meeting that she is retiring.

Greenburg came to the library in April 2001 and has since seen the library change drastically over the years.

"We've seen changes in the way people access information and reading materials with such things as the internet and e-books," said Greenburg. "We've tried to make some changes in our services with mobile access to our catalog and website."

Among the other major changes that occurred under Greenburg's watch was the increase in programming for all ages with the support of Friends of the Library.

"The author series I think is important," said Greenburg. "We've been able to bring some excellent speakers to Greencastle and Putnam County. They've been willing to share their time with schools and groups of children and high school classes, which has been really exciting"

Greenburg also noted that she hopes the Imagination Library program continues for years to come as she believes that it has the potential to have a major impact on children's readiness when they get to school.

As for her retirement plans, Greenburg hopes to focus more on playing music with some of the groups she performs with.

As director of the library Greenburg has accomplished a lot and provided support for not only the board and staff members, but for the community as well.

"The past 12 years have been interesting, exciting and challenging ones," said Greenburg. "I have had the pleasure of working with individuals, both board members and staff who are committed to the mission of public libraries and serving the community. That's been really important to me for years."

Although retirement is bittersweet for Greenburg there are many things she will miss about working at the library.

"I appreciate the support of the community over the past 12 years. I'll miss seeing the staff and the people that come in on a regular basis," said Greenburg. "I'll miss the opportunity to work on projects that I wasn't able to get started. There will always be something else to do and new ideas. Someone else can work on that now."

Along with Greenburg's announcement the board also discussed the children's room renovation project.

The project, which as been a topic of discussion for the past several months is finally making some progress as the board agreed to go with Odle McGuire Shook as the architectural consulting firm.

"We really like the way they structured the whole renovation and the ideas they had" said board member Lisa McCoy. "They've also designed so many libraries around us and we really liked all of them."

It is expected that the firm will present its proposal to the board during next month's meeting. The cost of the renovation will be $10,000, which is made possible due to a $5,000 grant from the Putnam County Community Foundation as well as with help from the library by transferring funds out of the furniture and equipment fund to the children's renovation project fund.

The library will also be sending out surveys for those participating in the Imagination Library program.

The surveys will help give the library some concrete data to use on seeing how effective the program may be.

The cost for the mailing of the surveys to more than 400 people, which will include return envelopes, is roughly $500, which will be taken out of the Imagination Library fund.

The program itself had a great month of June with donations totaling $6,795.

The next library board meeting will be on Wednesday, July 24 at 6 p.m.