Bainbridge's Schreiber is Teacher of the Year 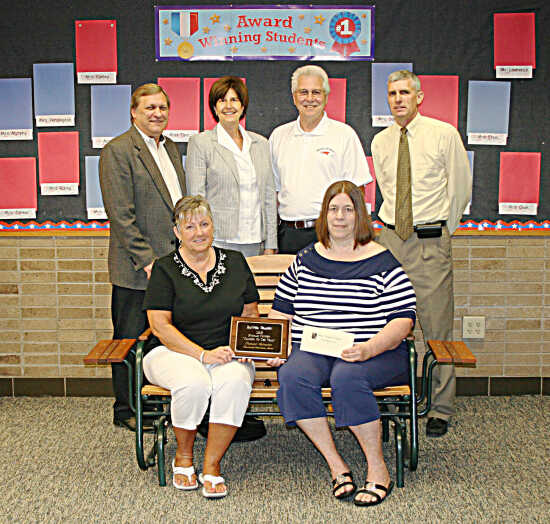 Banner Graphic/JARED JERNAGAN
Honored as Putnam County's top teacher this week, Bainbridge Elementary School teacher Pat Schreiber (seated, right) was presented with a plaque, $500 from First National Bank and a $500 grant to her school from the Putnam County Community Foundation. In attendance for the presentation were (front left) Bainbridge Principal JoEllen Cook, (back from left) Ken Heeke of First National Bank, Elaine Peck of the Community Foundation, North Putnam Superintendent Dan Noel and Daryl Taylor of the Banner Graphic.

BAINBRIDGE -- The results are in, and with a total of 541 votes, Bainbridge Elementary teacher Pat Schreiber is the 2013 Banner Graphic Teacher of the Year.

The special education teacher accepted her prizes on Wednesday at the school with Principal JoEllen Cook and Superintendent Dan Noel at her side.

Among her rewards were a $500 cash prize presented by Ken Heeke of First National Bank of Greencastle and Cloverdale, a $500 grand prize to the school presented by Elaine Peck of the Putnam County Community Foundation and a Teacher of the Year plaque presented by Daryl Taylor of the Banner Graphic.

Displaying the sort of attitude that has endeared her to parents and fellow teachers, Schreiber spread the credit around for her award.

"I don't want anybody to forget it's a team effort," Schreiber said. "Working in special education, you need the support of everybody. I can't thank them enough."

The $500 prize from the Community Foundation to the school is to be used at Schreiber's discretion, and she has already thought of ways it could benefit her students.

She has seen a problem with attention problems such as ADD and ADHD, and hopes to obtain a computer program to assist children with such conditions.

"It's so hard for those kids that have attention problems and there seem to be more and more of them," Schreiber said.

Schreiber was surprised to learn of the $500 cash prize from First National Bank and had not yet given it much thought, focusing instead on how to improve the school experience for her students.

Principal Cook was pleased with the public involvement the inaugural run of the Banner's Teacher of the Month and Teacher of the Year contests had inspired.

"This was nice. We got a lot of people interested in this," Cook said. "It's nice to know we have input from parents and community members and they are aware of the good job Mrs. Schreiber does.

"We appreciate the hard work."

While certainly proud of the honor for one of his own teachers, the superintendent said Schreiber's honor was indicative of the good work going on in all four county school corporations.

The March Teacher of the Month, Schreiber had three competitors for the Teacher of the Year Crown: Katina Wetter of Cloverdale Elementary (February), Jennifer Riggle of Deer Meadow Primary (April) and Kacey Seaver of Ridpath Primary (May).

The competition will begin again in September with its first full year of competition. Details will be available at www.bannergraphic.com.