Pride reflects on 48 years as educator 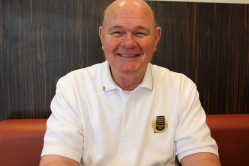 For the second time in four years Murray Pride has officially retired.

Pride, who has served the Putnam County area for more than 18 years, has decided again that it is time to spend some more time with the family and welcome a slower paced lifestyle.

Attending Austin Peay State University in Tennessee, Pride obtained his Bachelor of Science degree on a football scholarship. He went on to earn his Masters of Arts in Education from Western Kentucky University and furthered his degree by earning an Educational Specialist degree at Indiana State University.

"I got into this business because of the influence of teachers and high school coaches," said Pride. "I thought it was all I ever wanted to do."

Pride, originally from Morganfield, Ky., got his first teaching job in his hometown with the Union County Public Schools teaching social studies and coaching various sports such as coaching football, track and wrestling.

He then went on to spend 22 years at Tell City where he went on his journey from teacher to superintendent.

"When I started all I ever wanted to do was teach and coach," said Pride. "I was completely happy in the classroom and coaching. Then I got the opportunity to be an athletic director and the following year was asked to be assistant principal. At first, I said no, but then they talked me into it. I've been an administrator ever since."

Following his time at Tell City, Pride took a position at the Indiana Division of Special Education as a child services coordinator. He stayed there for two years before he had the urge to get back into the classroom.

It was that urge to be back in the classroom that brought Pride to Putnam County, first serving as the North Putnam superintendent from September 1994 until his first retirement on June 30, 2009.

"I had been there for 15 years, it was time to retire and enjoy the family," Pride said.

Following his retirement, Pride continued to work on short-term projects as a consultant at Administrator Assistants.

"It's a group of about 30 retired school people," explained Pride. "We do projects for schools and one of the things is to provide the interims."

After Eminence lost its Superintendent in July of 2010, Pride took the assignment, thinking he was just going to get school started and to find a replacement.

"I stayed there three years," said Pride. "It was a great assignment. Things just sort of clicked and I was happy and they were happy. I just continued to stay."

At the age of 71, Pride officially gave his intent to retire back in January. He said he felt that three years was enough and it was time to turn it over to someone else.

"It's a wonderful school with wonderful people," said Pride. "The 24/7 grind was getting hard."

Terry Terhune has officially taken over for Pride as superintendent after spending 17 years in the Eminence Corporation.

Terhune started out as an Eminence High School math teacher and coach and for the last seven years has served as the Eminence Elementary school principal.

Although retired, Pride still plans on working with the consulting firm on short term projects such as educational studies, preparing budgets, evaluations and more.

"There will be things to do, but it will be a short term basis," Pride said.

After spending 48 years in the education system, Pride will enjoy his down time as he welcomes his sixth grandchild, who is expected to arrive any day. However, there will be much he will miss.

"I'll miss the daily contact with administrators, teachers, students and staff," said Pride. "I'll miss the chance to work to make things better. We all want to work toward making the situation we are in better, I'll miss that."

One thing that Pride does look forward to is resting during the winter months.

"I'm not going to miss getting up at 4:30 a.m. and making sure the weather is ok," Pride said laughing.

It's apparent that Pride will miss being in the schools and working with those he now calls his friends. When asked if this retirement was officially the end, with a smile on his face Pride did not rule it out.

"We'll see what happens," he said. "If it's a short term assignment, I might consider it. It won't be any more three year commitments though."

Pride noted that in his time as superintendent both at North Putnam and Eminence, he had the opportunity to work with Old National Trail and Area 30.

Pride and his wife Sara, have worked to make the lives of so many better during their time in Putnam County. After retiring from the North Putnam School Corporation, the couple set up a scholarship for seniors. They just recently gave out their fourth scholarship.

"I think the relationship with the students, faculty, staff and the community. My wife and I always felt that it was important to be a part of the community where we live," said Pride. "We enjoyed that part of my job. I really enjoyed watching students grow and mature."

Reflecting back at his long career Pride notes that at one point he had someone tell him to surround yourself with good people who love and do their job. He firmly believes he has.

"I've been in situations where I've had good people around me, who were very conscientious and wanted to do the very best they could for young people. I hope I've been able to allow them to do their job to their fullest," said Pride. "I appreciate the support I've received from board members, teachers, staff and the communities that I've lived in. It's been an interesting and exciting 48 years."

His past list of accomplishments is extensive and although retired he still plans on being involved with the community in any way he can. Pride will continue to serve on the board for United Way as well as continue helping to do projects for the Putnam County Community Foundation, which had awarded him the Spirit of Philanthropy Award just last year.