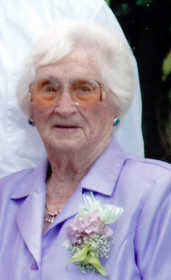 Born Jan. 24, 1918 in Lee County, Va., she was the daughter of Walker H. and Bertha Lee Reasor. After high school, Helen received her RN degree from nurses training at General Hospital in Indianapolis.

Helen had been a nurse at the Putnam County Hospital and Wishard Hospital, prior to serving as a nurse in the United States Army during World War II. She was a school nurse at South Putnam High School, a homemaker, helped her husband Billy farm and raise Suffolk sheep. She served as Putnam County Recorder and on the Putnam County Welfare Board, assisting women who were victims of abuse. She was also a caretaker of Deer Creek Cemetery and very active with the American Red Cross.

She was a member of the First Baptist Church, V.F.W., American Legion, National Suffolk Sheep Association and was inducted into the Putnam County Agriculture Hall of Fame in 1985. She was known as the "Local Mother Goose" for Ag Day.

She was preceded in death by her husband; parents; granddaughter, Heidi Ross; two brothers, James and Walker Reasor Jr; and a son-in-law, Tom Newton.

Funeral services will take place at 10 a.m. on Friday, July 5 at the Hopkins-Rector Funeral Home with interment and military rites to follow at the Deer Creek Cemetery.

The family will receive friends from 3-7 p.m. on Thursday, July 4 at the funeral home.

Memorial contributions may be made to Deer Creek Cemetery care of the First National Bank of Cloverdale, 1000 N. Main St., Cloverdale, IN. 46120.

Condolences and expressions of sympathy may be shared with the family care of www.Hopkins-Rector.com.