The contest will take place on Saturday, July 13 at the Fairgrounds Community Building at 7 p.m.

Contestants will be judged on the basis of beauty, poise and personality, which will be determined in both preliminary personal judging and the public contest.

This is the fourth of four features introducing this year's contestants. 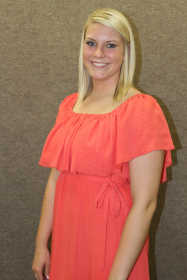 The 19-year-old Fair Queen contestant Ali Torr is from Greencastle. Torr is the daughter of Tony and Christy Cash and Mike Torr, and the sister of Damon, Kenzie, Madison, Darion, Megan and Caldon.

Torr graduated from South Putnam in 2012 and is returning to Kansas State University to study agricultural education.

In high school, Torr was involved with student council, FFA, cheerleading, competitive cheerleading and was a past 10-year 4-H member.

Her future plans are to graduate from college and return home to become an agriculture education teacher and a FFA adviser.

Torr decided to enter the contest to be involved in the 4-H program one more year.

"It has been such a big part of my life," she said.

She describes herself as an entertaining and organized individual. She said most people call her humble.

Torr's hobbies include walking her pigs, playing games and bowling.

The best advice Torr could give a younger person do not let the noise of others' opinions drown out your own inner voice.

She said the greatest impact on her life was going to Kansas State University and getting involved in Student Mobilization.

"Digging deeper into my faith has taught me patience, compassion and forgiveness," Torr said.

The person she admires the most is her papaw.

"He has taught me the love of farming and hogs," Torr said. "He has showed me responsibility and appreciation. Papaw is always there to support my life decisions. 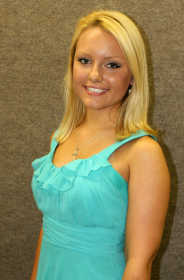 Fair Queen contestant Megan Roach is a 19-year-old from Roachdale. She is the daughter of Mark and Janice Roach and sister of Mandi, 21, Mark, 20, Mikayla, 18, Michelle, 17, and Michael, 14.

Roach graduated from North Putnam High School in 2012 and currently attends the University of Southern Indiana majoring in political science with a minor in economics.

In high school, Roach was a member of FCA, choir, teen court and the Spring Spectacle of Shakespeare at DePauw.

She is a part of Chi Alpha, Student Christian Fellowship and National Society of Collegiate Scholars. She was also a 10-year 4-H member.

Roach's future plans to get her masters at IUPUI in political science. She then would like to return to Putnam County to become involved with local government.

She decided to enter the contest to make friends and better her public speaking. She would also like to be a role model to the young girls in the county she loves.

Roach describes herself as an honest, responsible and ambitious individual.

Her hobbies are debating, reading, shopping, watching movies, baking, step aerobics and spending time with my family and friends.

The best advice Roach could give a younger person is to try your hardest to make your dreams come true.

"I have been told by many people that my goals are unrealistic, or impossible," she said. "Your goals are only impossible and unrealistic if you don't pursue them."

The event that had the greatest impact on Roach's life was when a friend of hers was killed in a car accident in high school.

"I had never known someone who had died, and I was devastated," she said. "The fact that such a young life could be taken just like that really opened my eyes. This tragedy made me realize how precious life is, and how I should not take it for granted when tomorrow is never promised."

Roach admires her parents because they made the decision to raise her siblings and her in a Christ-centered home.

"Without my Christian faith and supportive family, I would never be the person I am today." 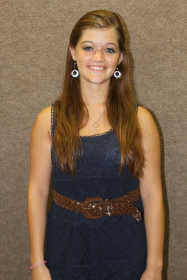 Fair Queen contestant Tatum Straziscar is an 18-year-old from Roachdale. She is the daughter of Sean and Kristy Straziscar and the sister of Tari, 19, and Trae, 15.

She is a recent graduate of North Putnam High School and plans to attend Purdue University to major in speech pathology in the fall.

She was also a part of teen court, 4-H and youth philanthropy.

Straziscar said she has always looked up to the queen and her court.

She describes herself as a friendly, outgoing person.

The best advice Straziscar could give to a younger person is to stay true themselves and not to let what other people say change them.

She was impacted the greatest by having a speech impediment, which prevented her from communicating effectively.

"Going through therapy taught me perseverance and patience," Straziscar said. "It also caused me to pursue a career in speech pathology and sparked my desire to help others."

She admires her grandmother the most. Her grandmother battled breast cancer for 40 years of her life and taught her perseverance.

"She taught me that even if things are looking gloomy ahead, you have to keep setting goals and pushing through with a smile on your face," Straziscar said.