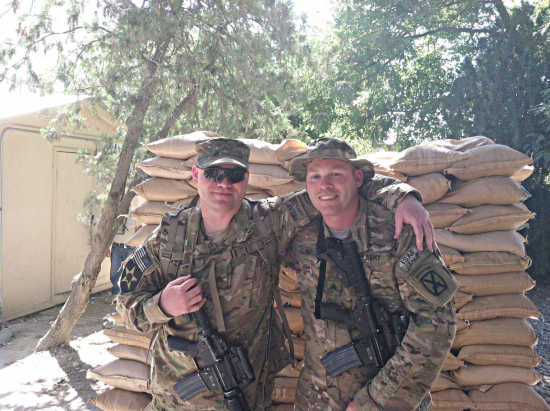 Even in the midst of ongoing war in Afghanistan, brothers Glen and Phillip Fenwick, both sergeants in the U.S. Army, enjoy a brief Fourth of July visit.

A chance meeting in Afghanistan is not something that generally happens.

It's a country roughly the size of Texas, with the added factors of rough terrain and constant war.

That makes the recent opportunity for two soldiers, brothers Glen and Phillip Fenwick from Bainbridge, to spend a couple of hours together all the more special -- and on the Fourth of July, no less.

Both men serve in the U.S. Army and are currently stationed in Afghanistan. Their assignments are different, however.

Sgt. Glen Fenwick is a member of the 101st Airborne Division already stationed in Afghanistan.

Sgt. Phillip Fenwick is with the 10th Mountain Division and was just arriving in the war-torn nation last week.

Although Phillip was arriving in country on the same base where Glen is currently stationed, under most circumstances there would have been no possibility for the two brothers to see each other.

Maybe it was an officer feeling generous. Maybe it was the spirit of the holiday. One way or the other, permission was sought and granted for the two brothers to meet.

And so the two proud soldiers got a little slice of their Independence Day in one another's company, a short time to catch up after having not seen each other in about a year.

Stateside, Glen, a 2000 North Putnam graduate, is stationed in Ft. Campbell, Ky., where he lives with his wife Shawna and their three children, Chase, 10, Kadince, 9, and Jorja, 5.

Phillip, a 2006 North Putnam graduate, is stationed in Ft. Polk, La. He is married to Robin, with whom he has two children, Hayliegh, 5, and Hunter, 10 months.

As quickly as the meeting happened, it also had to end. After a couple of hours, it was time for Phillip to ship out to his place of deployment.

Both brothers are scheduled to return to the U.S. in early 2014.