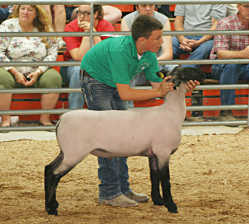 While showing six different species of animals Thursday night, Preston Porter was as cool as the weather for the 2013 Putnam County 4-H Fair.

Representing the dairy barn, the 14-year-old kept his composure as the youngest competitor for the 2013 Supreme Showmanship title.

When his name was announced, however, Porter let it all out, shedding tears of joy and taking some time to gather his thoughts.

For all the composure he showed through six classes of different species, Preston Porter let out all his emotion after he was named the 2013 Putnam County 4-H Fair Supreme Showman on Thursday evening.
Order this photo

"It's overwhelming," Porter said. "I can't really believe it."

Three years ago, it was Preston's older brother Garrett standing in the same boots as the county's supreme showman.

After that show, Preston walked into the barn to find his brother and older family members overcome with emotion. He asked why everybody was crying.

There is one more Porter sibling to go -- younger brother Briggs. Preston said he and Garrett would have to share their insights with little brother.

The win was not simply a family affair. Although Porter was representing the dairy barn on Thursday, he also shows swine and sheep. After receiving his trophy from the Tom Hendricks family, the first hug Porter received was from runner-up Grant Colvin, who represented the swine barn.

The runner-up award is presented by the Phil Fry family.

Other barn representatives competing on Thursday night were Bailey Goff of horse and pony, Andrea Steele of beef, Hannah Wyttenbach of sheep and Mikayla Roach of goats.

The other five competitors each had between eight and 10 years of experience, but a six-year 4-H'er managed to rise above them all.

Porter said he had been told he is the youngest competitor ever to win the Supreme Showman crown.

"It's a great honor," Porter said. "Youngest one ever to win it is kind of cool."

As much as the Supreme Showmanship event heightens the nerves as the six competitors await an announcement, when a winner is announced, things remain friendly, like this hug between champion Preston Porter and runner-up Grant Colvin.
Order this photo