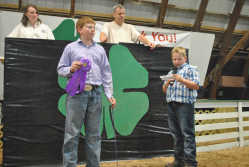 Brady Mann (right) announces to the crowd at the auction he plans to donate the money raised to the swine and beef barns. During the bidding time, as of press time, donors had bid $5,200, but the number continued to rise as more chipped in.

Thinking about livestock auction checks, 4-H'ers can get dollar signs in their eyes.

Auction money can help buy a car. It can help with college. It can go into a savings account.

When second-year 4-H member Brayden Mann started thinking about his auction money, his heart was in a different place.

At the beginning of the swine portion of Friday's auction at the Putnam County Fairgrounds, the Cloverdale youth stepped to the microphone to make an announcement.

Instead of pocketing the premium money that would be rightfully his from the sale of his hog, Brayden announced he would be donating everything to the swine and beef barns in a 50-50 split.

"I love the Putnam County Fair and this is my way of helping support it," Brayden said to the assembled bidders.

What happened next was one of the more stirring displays one is likely to see at a 4-H livestock auction. The price on Mann's hog raced higher and higher, eventually settling on a preliminary figure of $4,400.

Even with the bidding closed, the number continued to grow. Several more bidders chipped in, until the price settled on $5,200 as of midnight on Friday.

Brayden and parents Joe and Angela Mann expressed their gratitude to the bidders, who went above and beyond their goal of $1,000 to give back to the barns.

They said putting together the alliance of bidders was easier than they would have thought, as they pulled together most of the supporters in about an hour.

"We never dreamed it was going to be that much," Joe said.

While Brayden said the idea was originally his dads, it didn't take long for him to get on board.

"I was a little iffy at first, but after I started thinking about it, I thought it would be good for the barns to help upgrade everything," he said.

Both barn superintendents testified that the donation of $2,600 to each will be helpful. 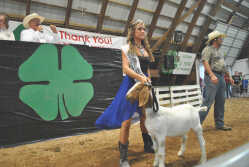 Beef superintendent Rick Woodall said the barn recently completed a $9,300 electrical upgrade, which some of this donation will help finish paying.

After that, there is a wishlist with a couple of items, as well as plans for a committee of adults and 4-H'ers about how to improve the experience for the young people.

Swine superintendent Jim Bowling said there was not specific upgrade in mind yet, but the money would improve the facility in some way.

Bowling added that the simple act of support 4-H was what was most meaningful.

"It means a lot to know there are people out there who care about 4-H and the whole program as much as I do," Bowling said. "Obviously his parents have taught him the real meaning of 4-H. It's more than getting to sell your pig and making a couple hundred bucks. There's more to it than that."

"He's a pretty awesome kid," Woodall said, adding that Brayden is known as "The Ice Man" around the beef barn for his energy in their fundraising ice sales.

Mann was far from the only 4-H'er selling his animal on Friday. More than 200 4-H'ers sold animals, bringing in total premiums of $133,725, beyond the base market bids for each animal.