Cross and McCullough get wins at Lincoln Park Speedway 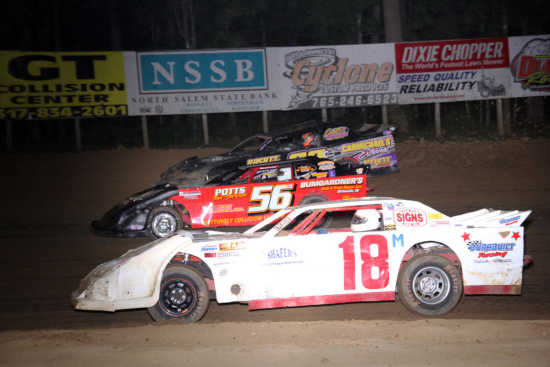 Greencastle's Doug McCullough (No. 18) goes three-wide with CJ Bryan (No. 56) and Kenny Carmichael Jr. (No. 92c) on the way to grabbing the UMP Super Stock victory. He would also record a victory in the first bomber feature. (Banner Graphic/CAREY FOX)

Chad Boespflug has had quite a summer piloting the famed No. 57 Paul Hazen sprint car and Saturday night's event at Lincoln Park Speedway provided the next chapter.

Boespflug blasted to his 21st top-10 finish of 2013 and scored his fourth victory of the season when he made a superb slider stick on the final lap to edge Shane Cottle at Lincoln Park Speedway for the Putnamville Clash victory that garnered the team a $2,000 payday.

It was only fitting that Greencastle was well represented this weekend as local hot shoes Blake Cross and Doug McCullough visited victory lane as well. Cross captured his very first checkered flag when he took the lead early in his bomber feature and held off the rest of the field down the stretch. McCullough did double-duty in the UMP Super Stock class as well as the bomber class. For the second time this season he pulled off the double dip in winning both features for the extra payday.

Jesse Cramer held off Paul Bumgardner after a restart with three laps remaining to take the UMP Modified feature in his No.12.

Cramer started on the front row and built a big lead early on as the rest of the field gave chase. Eric Varner was the early challenger with Brian Hayden and Bumgardner fighting for the right to challenge for the top spot. However, Bumgardner found a clear lane through lapped traffic to gain the second spot. Cramer was on a rail out front of the field as a caution flew in the final circuits to re-set the field.

When the field went green, Cramer got a good start ahead of Bumgardner and Hayden to pick up the victory. Eric Varner placed fourth and Randy Shuman took fifth

In the 26th running of the Putnamville Clash, a first lap pileup took out a portion of the sprint car field to start the A-main, but there wasn't much that could stand in the way of Boespflug, who was a rocket from the start. Even lapped traffic, which came into play quickly, wasn't much of a factor. He managed the back markers with the skill of an artist and with the lead foot of the fearless.

Blasting through a couple of three-wide situations down the stretch ahead of Cottle and Dave Darland, Boespflug looked as if he would walk away from the field. However, with five circuits standing between him and a big payday, a caution came out and gave Cottle another crack at the win.

Cottle made the most of his shot as he pulled off a perfect slide in turn four for the lead on the restart and held that spot to the white flag.

On that final lap, Boespflug looked for his shot and with less than 75 yards remaining, he ripped off a perfect slide that stuck to get past Cottle for the Putnamville Clash championship.

Darland was third with Brady Short placing fourth and Wes McIntyre finishing in the fifth position.

In the UMP Super Stock feature, CJ Bryan roared out to the early lead as Mike Staggs and McCullough were in tow. Kenny Carmichael Jr. and Cullen Goodman were battling door-to-door for the fourth spot.

Lapped traffic played a major role down the stretch as the leaders went three-wide looking for a clear lane with Carmichael snagging the lead ahead of McCullough and Bryan. The group continued to fight for the top spot to the final lap when McCullough nosed ahead off the final corners and won a drag race to the checkered flag ahead of Carmichael and Goodman. Bryan took fourth ahead of Josh McDaniel.

McCullough climbed from his car following the feature and hopped into his No. 19 bomber where he started 10th overall.

Josh Foxworthy led the first half of the A-main as McCullough methodically worked his way forward before grabbing the lead in lapped traffic. From there, McCullough maintained his lead the rest of the way as Foxworthy took second ahead of Mike Fisher Jr., David Wallen and Justin Minardo.

The final feature of the evening saw Jeff Beggs and Tim Wright start out front and pace the first half of the A-main before Beggs began to slip back into the field. Wright also had problems, breaking a driveline and Cross was right there to assume the lead and pull away from the rest of the field. Damon Harrell battled forward to score the runner-up spot ahead of Ron Smith, Mark Dickerson and Jerry Hutto.

Saturday's next event will feature a regular show of sprint cars, UMP Modifieds and Super Stocks as well as bombers.