Head-on collision results in one fatality on U.S. 36

Banner Graphic/ LAUREN BOUCHER
A Wednesday afternoon crash on U.S. 36 in Bainbridge, resulted in a fatality after the driver of a GMC Envoy (right photo) crossed left of center heading eastbound and struck a 2007 Dodge Cablier.

BAINBRIDGE -- A Bainbridge woman is dead following a two-vehicle crash on U.S. 36 in Bainbridge on Wednesday afternoon.

Naomi Barker, 84, was pronounced dead at the scene of the crash, which was just west of County Road 100 East near 1114 E. U.S. 36. The other driver, 28-year-old Jocelyn Pollard of Pittsboro, was transported via Operation Life to Hendricks Regional with non-life-threatening injuries.

"She was left of center for some distance," explained Chadd. "The westbound vehicle (Pollard) was nearly stopped."

Chadd went on to explain that Barker's vehicle continued left of center and struck Pollard's 2007 Dodge Caliber head-on. She then continued to drive off the road on the north side, flipping her 2006 GMC Envoy.

"She just shot straight across," Chadd said. "Preliminary indications are that it was a medical issue prior to impact, but autopsy is scheduled to be performed tomorrow."

Pollard was talking and conscious at the scene before being transported to Hendricks Regional.

"She was talking and conscious," said Chadd. "It looked like lower extremity injuries, possibly a broken ankle."

Barker was a well-known resident in Bainbridge and a former Town Council member. She served on the council from January 2004 to the end of her term in 2011.

Barker was also the owner of Video Tan as well in the LaundryMat in Bainbridge.

Following the crash, INDOT workers kept the road closed for two-and-a-half hours before opening it just after 4 p.m. 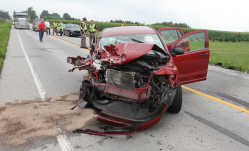 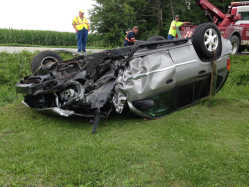 Courtesy of Jon Chadd
Comments
View 19 comments
Note: The nature of the Internet makes it impractical for our staff to review every comment. Please note that those who post comments on this website may do so using a screen name, which may or may not reflect a website user's actual name. Readers should be careful not to assign comments to real people who may have names similar to screen names. Refrain from obscenity in your comments, and to keep discussions civil, don't say anything in a way your grandmother would be ashamed to read.
Respond to this story