She was born on Aug. 12, 1928 in Putnam County to Arthur Lyons and Blanche Ferrand.

Naomi, a life-long resident and business person in Bainbridge, was the owner of Bainbridge Video and Tanning and the Bainbridge Laundromat. 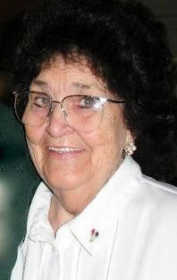 She served her community on the Bainbridge Town Council from 2003 until 2011.

She was preceded in death by her parents; two husbands, Arlando Lewis in 1984 and Carmont Barker in 2000; a son, David "Bob" Lewis; a beloved grandson, Anthony Lewis; a beloved great-grandson Austin Lewis; two brothers, Charles Lyons and Jack Lyons; and a sister, Roberta Slavens.

The family will receive friends on Sunday, Aug. 4 from 2-7 p.m. at the funeral home.

Memorials in Naomi's name may be directed to the Bainbridge Cemetery Association, P.O. Box 203, Bainbridge, IN 46105.

Condolences, memories and expressions of sympathy may be shared with the family at www.Hopkins-Rector.com.