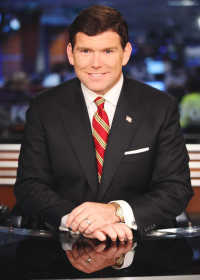 Bret Baier, the 1992 DePauw University graduate who anchors Fox News Channel's "Special Report with Bret Baier," the No. 1 cable news program in its time slot, will return to his alma mater as part of DPU's 2013 Old Gold Day celebration.

The public is invited to attend "A Conversation with Bret Baier," scheduled for 10 am. Oct. 12 in Kresge Auditorium of the Green Center for the Performing Arts (605 S. College Ave.).

Baier has been anchoring "Special Report" since January 2009, when he took over for Brit Hume.

The DePauw grad joined FNC in 1998 as the first reporter to be based in the Atlanta bureau.

Baier was an English (composition) and political science double major at DePauw, and was captain of the Tiger golf team. Active in student television as an undergraduate, his first professional job was at WJWJ-TV (PBS) in Beaufort, S.C.

Throughout his career, Baier has secured numerous exclusive interviews with government officials. He had the only interview with President Obama during the week leading up to the historic healthcare vote in the House of Representatives in March 2010. Peggy Noonan of The Wall Street Journal called it, "The most revealing and important broadcast interview of Barack Obama ever."

Baier had an exclusive sit-down with Gen. David Petraeus, which was his final interview as the head of U.S. operations, live from Iraq in September 2008.

During his tenure at FNC, Baier has covered a variety of major news events, including the congressional vote on healthcare legislation and the shootings at Fort Hood, Texas. He provided up-to-the minute coverage of the war in Iraq -- traveling to Iraq on 13 separate occasions since 2003. He's also covered the war in Afghanistan, reporting live there 11 times since 2001 -- including a two-week stint embedded with U.S. Special Forces along the Afghan-Pakistan border.

Baier also reported notably on the Sept. 11, 2001, terrorist attacks live from the Pentagon and then followed the evolution of the attacks into the War on Terror. Previously, he reported on the U.S. military mission in Haiti, 1999 conflict in Kosovo and 2000 election recount in Florida.

In a 2008 visit to DePauw, Baier said the university "contributed tremendously" to his success and that his liberal arts education led him to examine many topics and ask a lot of questions.

The Oct. 12 program will be moderated by Jeffrey M. McCall, professor of communication and 1976 graduate of DePauw.

"A Conversation with Bret Baier" is among the highlights of Old Gold 2013.

Old Gold (aka homecoming) will kickoff on Friday, Oct. 11, with an 8 p.m. concert by Grammy Award-winning composer Fernando Otero.