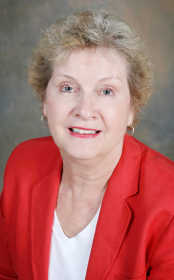 Putnam County got some sad news on Wednesday with the passing of county commissioner Nancy Fogle.

The 74-year resident of the county spent nearly 17 combined years as a commissioner or council member, but for Fogle, leadership and service were about a lot more than a title.

The goal was always to find what was best for the community she loved dearly.

"I wish people would get more involved," Fogle told the Banner Graphic in December 2010. "You don't hear from people unless something's wrong. They just don't show up."

Show up was exactly what Fogle did, up until her grim prognosis came on May 30. Even then, Fogle managed to make two more meetings of the commissioners, at one of which she had to emotionally announce she was stepping down as president of the board.

Putnam County was what she knew, and she wanted to make it a better place.

Fogle was in her 50s when the politics bug bit her, beginning her first term on the Putnam County Council in 1993. After three terms as an at-large member, she stepped away in 2004, only to return in 2009.

She had been a Putnam County Commissioner since December 2010.

Throughout her time as a public servant, those around her were struck by the hours she put into it above and beyond one or two meetings a month.

"She took it all very seriously," daughter Gayla Hutsell Guignard said. "If she had a job to do, she didn't just fly by the seat of her pants. She always researched everything she did. If somebody was complaining about the roads, then she got out with the county highway and rode with them.

"She loved Putnam County and her service was all out of that love."

It wasn't simply family who thought so much of Fogle's commitment.

Another trait her fellow public servants noted was Fogle's willingness to stand up for her beliefs, popular or not.

Nancy Michael served with Fogle on county council from 1993-1995.

"She was very passionate about public service and I know she loved serving the people of Putnam County," Michael said. "You might not always like her decision but she always made a decision for what she thought was in the best interest in the county in the long term."

County councilman Gene Beck, who served with Fogle for two years as a commissioner, said he and Fogle sometimes had different ideas about the best course of action, but always tried to work it out for the county.

"Nancy had her ideas on everything and I did too, but we always got it worked out," Beck said. "We did a lot of things in those last two years that I served with her. She will be missed by a lot of people."

Fogle was the 14th of 17 children of John Raymond and Ruth Blue Hammond. Perhaps it was simply being heard at that enormous dinner table that made Fogle unafraid to speak her mind.

The Reelsville High School graduate spent the years between 1960 and 1972 as a housewife and full-time mother, before becoming a real estate broker, first with Fogle Real Estate and later for Collins Evans Real Estate.

Her time as a realtor helped her as a public servant. As Michael said, Fogle "knew everybody in Putnam County."

Seemingly everybody knew her, and when news came, first of her illness in late May, and then of her death on Wednesday, the compliments came rolling in.

"It's a loss but to the community at large," one friend said. "She's always had the best interest of the county at heart, wanted to work things for the better."

"Nancy's the only person I know who's been in politics as long as she has who isn't a politician," another friend told her family recently.

In her time at Mill Pond Health Campus fighting her illness, Fogle received more than 300 cards from friends and well wishers. It's been an overwhelming outpouring at times, but one that family members certainly think is deserved.

Arrangements are pending at Bittles and Hurt Funeral Home, Greencastle. A full obituary will appear in Friday's edition of the Banner Graphic.