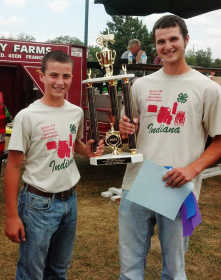 He is the 19-year-old son of Bryan Scott and Karen Clifford and the older brother of Dalton Scott.

This year he was able to come back and win the contest as a perfect culmination to his 4-H career. Nick is now headed on to compete at the national level.

His brother, 13-year-old Dalton, also advanced to the State Fair competition and compete in the Junior Ag Tractor contest.

Both boys won at the local county level, regional level and advanced on to compete at the state level.

The Ag Tractor Contest consists of a written test, parts identification and a driving test, pulling and backing a four-wheel hay wagon through a timed obstacle coarse.