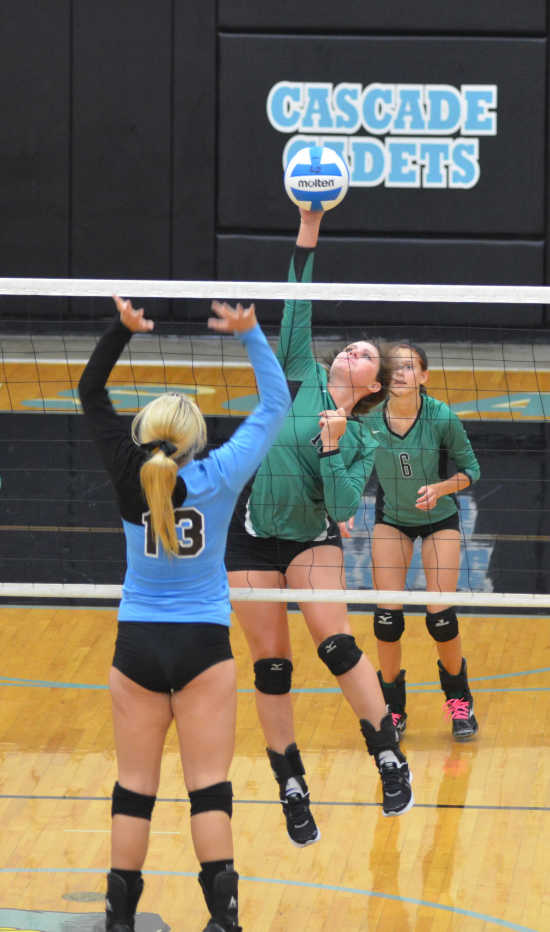 Cloverdale's Adri Patterson goes up for a spike during the match at Cascade on Thursday. Patterson had four kills. (Banner Graphic/TRENT SCOTT)

CLAYTON -- Cloverdale's volleyball squad has found Cascade to be one of the toughest opponents on the schedule.

Beating the Cadets twice last season led the Clovers to a WCC and their first finish above Cascade since 2007. The hosts did not intend for the pattern to last with a 25-15, 25-23 and 25-20 win over Cloverdale.

A slow first set for the visitors saw the Cadets take command early and whenever the hosts could not find a way around Cloverdale.

Self-inflicted mistakes made it difficult for the Clovers to compete according to head coach Kathy Moore.

Sets two and three proved to be far more entertaining for those in attendance.

The two squads got no more than three points of separation in the middle set. Cascade held the advantage for most of the opening until the Clovers tied the hosts at 15-15.

Cloverdale took the lead and held a 23-20 advantage but could not seal the deal. Five straight points for the home side saw the Cadets eke out a 25-23 over the Clovers.

Moore said that the win was there but the squad did not know how to close the set out.

"We need to learn how to finish," Moore said. "We're not there yet but we're going to get there."

The loss could have easily deflated the Clovers. Instead, a frantic third set ensued. Cloverdale held a 7-6 lead and tied Cascade 12-12 before the hosts took the lead for good, albeit with little margin for error.

Points went back and forth late in the set but Cloverdale could not hold serve long enough to erase a three-point deficit and fell to 0-2 on the season.

Moore said that the final set was exactly the kind her squad was currently built to handle.

"The third set was a dogfight," Moore said. "It was about who was going to outlast the other.

"Cascade digs the ball well. They're bigger than we are and hit the ball very well. My team is little and scrappy. We don't go down easily.

"I'm proud of my kids," Moore added. "We only have one returning hitter and we have a new setter. Our offense is very young. We're in a learning mode right now."

Moore said that as the squad approached future teams, including Turkey Run next Tuesday, the offense would eventually find its footing.

"We're learning how to define ourselves, how we approach things and what we're going to call ourselves," Moore said. "We decided early on to be scrappy, to try and outlast people until we get our offense to the point where we feel more comfortable.

"I feel like our offense is coming. It will get better as our hitters get more confident. The last two nights we've played, Danville and Cascade have double- and triple-blocked us. That can be intimidating to a smaller lineup.

"We've been looking for other ways to try and score," Moore added. "I thought Lexi did that very well. Our setter is new but she is a go-getter and does not give up on any ball.

"None of those kids give up on a ball. That's who we are as a team. We're young but we're going to improve and get better."

Next Match: Cloverdale travels to Turkey Run next Tuesday.