Cougars lose tough one to Cadets 28-14 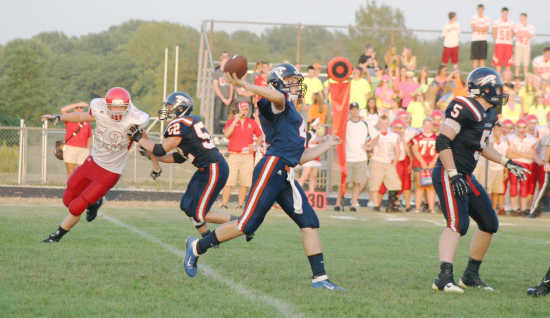 CLAYTON -- The goal for the North Putnam Cougars on Friday night when they traveled to take on the Cascade Cadets was to avoid their first 0-3 start to a season since 1995.

The story of the game early was the penalties and the lack of offense for the Cougars. North Putnam racked up five penalties in the first half for a total of 60 yards.

"The mistakes and the penalties are what ate us up. We had way too many penalties," North Putnam head coach Greg Barrett said.

The Cadets got on the board first in the game when junior Sawyer Donovan dropped back to pass, had to scramble and was dragged down by one of the Cougar defenders. Donovan threw the ball up to the goal line and senior Zach Batts ran under it to put the Cadets up to stay, 7-0.

The Cougars suffered another unlucky setback when Donovan threw the ball again. This time the pass was deflected right into the arms of Batts for another touchdown. The 34-yard completion with 2:23 left in the half gave Cascade a 14-0 lead going into the half.

The Cougar defense came out of the half very strong and on the Cadets' second possession the defense came up with a huge stop. Junior Cole Dean made a juggling interception and returned it all the way to the Cougars 47-yard line.

The Cougars were prevented from scoring, but after giving the ball back to the Cadets the defense made another stop.

"At times we played okay. I didn't think we took advantage of the opportunities we had to score," Barrett said. "I thought we did a great job blocking on the edge, unfortunately we got called for holding."

On Cascade's first down with 3:10 left in the third, NPHS senior Grant Bryan, capitalizing on his monster defensive night, got into the backfield and sacked the quarterback Donovan, who fumbled the ball. Fellow senior Nick Pollock pounced on the ball and the Cougars were in business.

The Cougars drove the ball down to the five-yard-line and senior Gabe McFadden hit senior Garrett Plessinger on a swing pass for the Cougars first score.

The Cougars fought back from a 14-6 halftime deficit and were back in the game. The Cougars allowed the Cadets to come right back and score though.

Hooking up for their third touchdown of the night to push the score to 21-6 was the duo of Donovan and Batts.

The Cougars were waiting for their chance to get back in the game but, with 3:12 left in the game and Cascade pinned at its 10-yard line, sophomore Zac Butler ripped off a 90 yard touchdown run.

"The kid made a great play, he's got great speed," Barrett said.

The Cougars answered back when McFadden found senior Beau Green in the back of the end zone for an eight-yard score. The Cougars went for the two-point conversion and McFadden kept it himself and converted the try, which cut the lead to 28-14.

The Cougars have much to be proud of as this game was a large improvement over last week's 18-0 loss to Southmont.

The defense once again shined as two of the touchdowns were lucky deflections and one was a sudden burst of speed. If the offense can play like the defense anytime soon, the Cougars will be a tough opponent for anyone.

"I thought we battled hard," Barrett said, "but we need to learn how to finish."