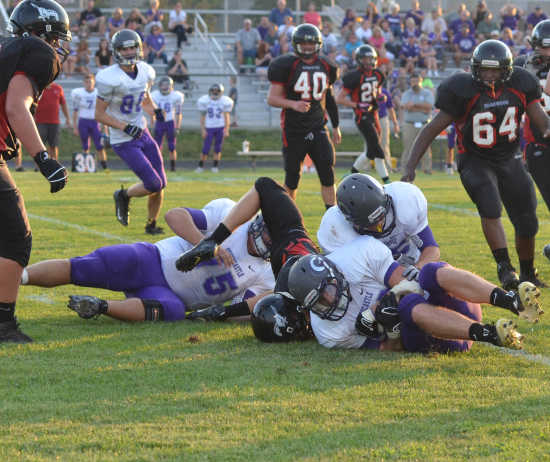 Greencastle senior Grant Mundy (bottom right) falls on the ball to recover a key fumble for the Tiger Cubs in their win at Edgewood on Friday. (Banner Graphic/TRENT SCOTT)
Order this photo

ELLETTSVILLE -- Through the first two weeks of the 2013 football season, Greencastle's offense had little trouble in getting the ball into the end zone. Getting there Friday night at Edgewood proved to be a far more difficult challenge.

The Tiger Cub defense came to the rescue, forcing a turnover one play after a punt to set up a quick touchdown drive in the second quarter. That would be enough for the visitors, with two late scores giving Greencastle a 21-0 victory over the Mustangs.

The game went down in the win column but Greencastle head coach Josh Buis said the squad was not impressed with their own performance.

"I can tell you right now that this is the first time I've ever seen kids upset after a win," Buis said. "They know they didn't play very well. These kids are hungry and take full responsibility for their actions.

"They know they didn't play very well and I can assure you they'll be ready tomorrow to get to work."

Edgewood started the game with a 16-play drive that was only thwarted on a fourth-and-short stop by the visiting defense.

Buis said that a lack of adjustments hurt the defense early in the game.

"That was 100 percent coaching," Buis said. "I did a poor job coaching and didn't make the adjustments until the second half. It was a poor job game planning and I didn't put our kids in positions to make plays."

Greencastle responded with a 12-play drive of their own that stalled out inside the Mustang 20-yard line. The first quarter ended shortly their after and after forcing the hosts to punt, the Tiger Cubs got a pivotal moment to go their way.

Greencastle punted the ball back immediately to Edgewood but on the next play, Mustang running back Gabe Koontz fumbled the ball away to Tiger Cub lineman Grant Mundy.

Five plays later, Tyler Scott threw a quick pass to Seth Brown that saw the receiver barrel through several defenders and in for the touchdown.

The field-position swing proved to be a major moment in the game.

"It was extremely huge," Buis said. "It was a field position game and for a while, we didn't have it. We were battling defensively, pursuing to the ball and that turnover was huge because it gave us the field position back and a chance to score."

With a 7-0 lead, Greencastle's defense held off the hosts three more times in the first half, even after being put under pressure after an interception and bad punt by Scott in back-to-back series. Edgewood's best chance at scoring came to nothing when Jackson Snider missed a 41-yard field goal as the half ended.

Greencastle had a chance to extend its lead to start the second half after a Scott-to-Brown connection netted 66 yards. A bad shotgun snap that cost the visitors 16 yards preceded Scott's second interception of the game, leaving the score 7-0.

With neither defense breaking, field position became increasingly important in the game as time ticked away. Midway through the fourth quarter, the Tiger Cubs finally put the game beyond doubt.

Scott and Brown hooked up again for 48 yards to get the visitors moving. After a pass interference call against Edgewood moved the ball inside the host's 20-yard line, Alec Pettit went on a bruising 14-yard run to double Greencastle's lead.

A minute later, The Tiger Cub defense ensured the victory in thrilling style. Jonathan Newgent intercepted Edgewood's Nate Ganz and ran 38 yards for the pick-six that completed the 21-0 scoreline.

The late swing was important for morale, according to Buis.

"It was big," Buis said. "Our kids had to overcome mental mistakes, penalties and bad field position while they pounded the rock. We found a way to swing the field position and secured the win through Johnny Newgent's pick-six.

"There's a lot of momentum from finishing the fourth quarter like we did today. It gives us momentum coming in tomorrow instead of leaving here with our heads down."

Next up for Greencastle is a school few may have heard of in Noblesville Home School.

Buis said that while the name may be unfamiliar, the results the Lions have put up speak for themselves.

"I told our players tonight to not let the word 'home school' fool them," Buis said. "They're a good football program. They were 9-1 last year and 2-0 this year.

"They've got an extremely talented quarterback, a coach's son, which tells me he's a cerebral football player. They spread it out and anytime you play a quarterback who can throw it around the field, you're going to have some problems." 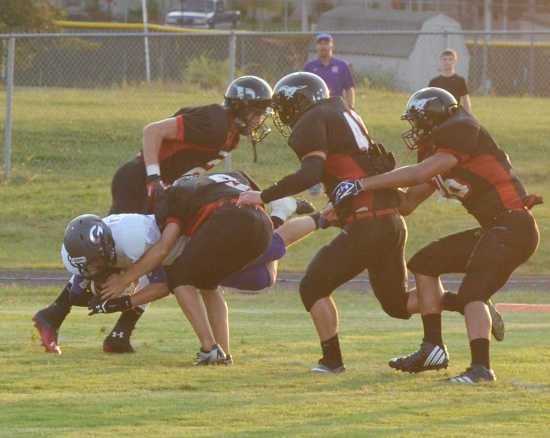 Seth Brown dives through a swarm of defenders to score the opening touchdown of the game during Greencastle's shutout win at Edgewood. (Banner Graphic/TRENT SCOTT)
Order this photo

Next Game: Greencastle travels to Noblesville Homeschool next Friday.