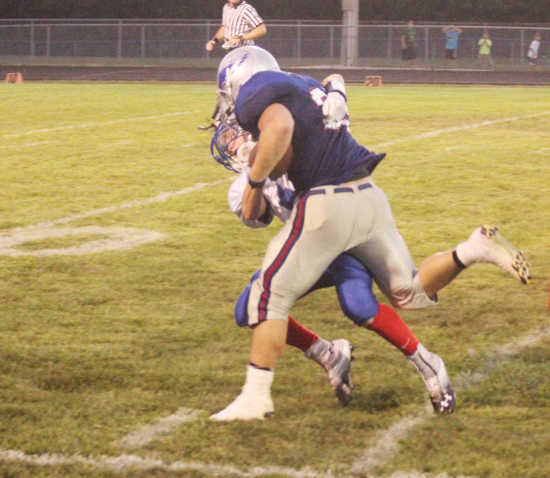 South Putnam junior Lucas Lorian runs through a Rockville defender Tylen Mills in the third quarter on his way to a career-best 319 yards and four touchdowns. (Banner Graphic/GRANT WIEMAN)
Order this photo

On his first carry of the game, South Putnam junior Lucas Lorian ran through three tackles then had his momentum slowed. He eased up, thinking he was down, and Rockville stripped the ball and recovered it.

On his next carry, he broke three tackles, cut to his right and ran for a 56-yard touchdown. He finished with 319 yards and four touchdowns on 29 carries in the Eagles 66-7 win.

The career-day for Lorian was part of an outrageous 564 rushing yards on 55 carries for SPHS, which send the Rox (2-1) home with their first loss of the young season.

South Putnam (2-1, 0-0 WCC) was unstoppable on the ground. On each play the ball carrier had a hole several yards wide to mosey into, but running into open spaces wasn't what made the Eagles' day special.

An SPHS back broke two, three, or seven tackles on every play.

"Our kids are strong," SPHS head coach Troy Burgess said. "Lucas is a weightroom guy. Wes (Riner) is a strong kid, though he's not very big. Kyle Shaffer is a big strong kid.

"Our kids do a good job of working hard in the weight room, and that's what it's about. We have to in order to play the schedule we play."

The ground attack was so potent for SPHS that senior quarterback Sawyer Arnold needed to complete only one pass in the game -- a 32-yard touchdown to senior Klayton Vittetow with 8:07 left in the second quarter.

Lorian's day was 20 yards shy of the Eagles' single game recent-record, set by Rob Gibson in 2011. The school-record was not immediately known. 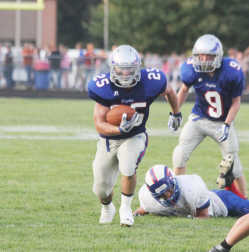 With the Eagles leading 31-7 at halftime, the game was seemingly already out of hand, but because the younger players were on a quarters limit, Lorian and the other starters were back out to start the third quarter.

He shot through open holes in front of him and, on the first possession, piled up 47 yards and a 34-yard score.

"We challenged those guys up front," Burgess said. "We felt like, going into this season, that (the offensive line) was a strength of our football team. ... We weren't happy the first two weeks.

"We didn't feel like we've played up front the way we're capable of playing, and those guys kind of challenged themselves this week. I'm very proud of the way they responded."

All the backs in the Eagles' high school program were able to take advantage of the holes and the wilting Rox defense.

"Joe Waters did a great job," Burgess said. "Being a fullback in our offense is kind of like being an offensive lineman. You don't get much glory, but he was great"

Freshman Kyle Shaffer, indecipherable from Lorian in impact, speed and style, had five carries for 120 yards and a touchdown.

It wasn't all smooth sailing for the Eagles. They had several costly penalties that led to a game-tying score in the first quarter, but SPHS had an authoritative response to any mistake they made: Give the ball to Lucas.

He had carries on five straight plays during a stretch in the second quarter and three more straight in the third.

The Eagles, ranked No. 8 in 1A before the game and sure to move up, will play at winless North Putnam next week. Burgess cautioned that the record doesn't tell the story for the Cougars and said the Eagles will have no problem getting motivated for their conference rival.

"I have the utmost respect for North Putnam, their players and their coaching staff," Burgess said. "We're going to have to work our tail off to get prepared, because I promise you they'll be prepared for us. His kids always play hard and they play with a lot of class."

South Putnam has an offensive weapon, and he doesn't need any carries.
Zane Yon, a junior tight end, linebacker and kicker for the Eagles, was perfect on his extra points (9-for-9), but he silenced the crowd by rushing onto the field to attempt a 40-yard field goal late in the second quarter.
With the play clock ticking down from five as he started his backpedal, the ball was snapped just in time to avoid a penalty. He boomed it through the uprights with room to spare, setting a new school-record.
"I've felt like for three years Yane's had the power to do that," Burgess said. "He's got great leg strength. He's worked hard in the weight room. Usually when he misses it mental more than it is physical and tonight he did a great job. ... He might have had another ten yards in him."

Rudy Harris is a few weeks from becoming a dominant force up front.
Harris spent his junior year away from the field, instead focusing on lifting and preparing for the winter wrestling season. It paid off as he earned a trip to the state finals in Indianapolis.
Returning to the field now, he looks like a massive, intimidating force lining up from his defensive end spot. He had a sack on the goal line that could have been called a safety and blew up several other plays by getting into the backfield. His timing isn't quite down and he was passive against the Rox, but when he gets comfortable Burgess thinks he'll have a game-changer.
"Each week Rudy is going to get better," he said. "We went back to a four-front (defense), let him put his hand on the ground and he was more comfortable. We've had him standing up as an outside backer, and I think tonight he was more in his comfort zone.
"Rudy is a big-time wrestler, and those wrestlers like to put their hands on the ground and get in there and mix it up." 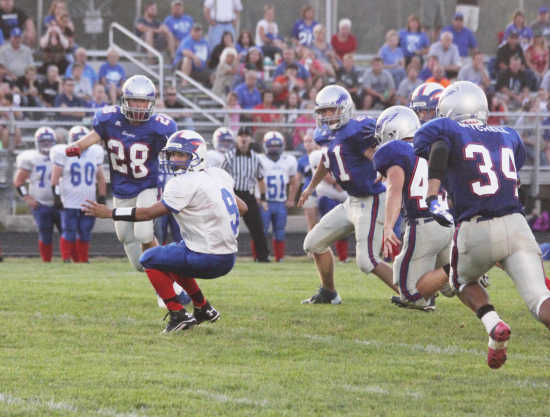 South Putnam defenders Ben Fiest (28), Josh Tubbs (21), Jake Wiggs and Derrick Mitchell (34) have Rockville quarterback Kiontre Wilkey running for his life as they apply pressure in the backfield. Wilkey was 8-for-21 passing in the game. (Banner Graphic/GRANT WIEMAN)
Order this photo