The 52nd Putnam County Playhouse season will close this month with a production of the comedy "Harvey."

The PCPH production is scheduled for Thursday, Friday and Saturday, Sept. 12-14 and again Sept. 18-21. All performances begin at 8 p.m. 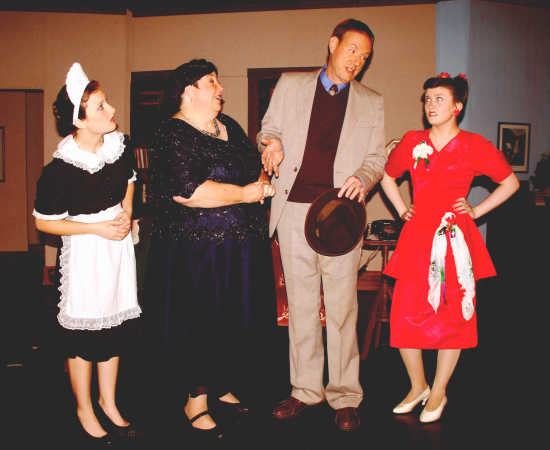 Elwood P. Dowd (Michael McClaine) tries to convince those around him that Harvey, the rabbit, really exists in a scene from the Putnam County Playhouse production of the classic comedy "Harvey." Cheyanne Elliott (left) plays the maid, while Kathi Elliott is Veta and Jerica Bean (right) portrays Myrtle Mae. The comedy opens Thursday night with subsequent 8 p.m. performances Friday and Saturday and again Sept. 18-21 at the Hazel Day Longden Theatre in Greencastle.

The comedy classic won the Pulitzer Prize in its first season on Broadway in 1944.

The play is being directed by Jim Rambo with Bryan Schroeder serving as assistant and technical director.

Michael McClaine has the leading role of Elwood P. Dowd who believes he has a best friend in a six-foot-tall rabbit he has named Harvey. His friend is visible to him, but invisible to everyone else.

Veta is convinced by family friend Judge Omar Gaffney (Jim Elliott) that Elwood should be put away. She chooses the sanitarium run by Dr. Chumley (Don Collins), who has his own problems with his assistant Dr. Sanderson (Dustin Bond) and his nurse Miss Kelly (Sarah Bond).

Playing other characters in the play are Karen Temple, David Roberts, Sandi Rossok, Cheyanne Elliott and Alan Zerkel. Shelly McFadden and Marilyn Burdsall are heard as featured performers at a party in the first scene.

Also working on the production side of "Harvey" are Brenda McClaine, Diana Van Middlesworth and Ruth Poor.

The Playhouse presentation of "Harvey" is being sponsored by Duke Energy.