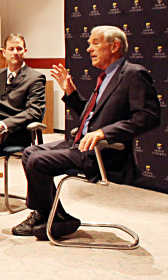 Seated onstage for a press conference at the Watson Forum, retired congressman Ron Paul addresses a gathering of students and media members prior to his Tuesday evening Ubben Lecture. (Photo by HOANG NGUYEN)

With questions about the U.S. role in Syria hanging in the air throughout the country Tuesday night, a capacity crowd at DePauw University's Kresge Auditorium had the privilege of hearing from a 12-term congressman and three-time presidential candidate.

While Ron Paul rarely directly addressed Syria in his Ubben Lecture, he made known his stance on U.S. involvement in foreign wars.

"I don't think we should be intervening in the affairs of foreign nations because it's none of our business," Paul said early in the speech.

Beginning his lecture 90 minutes before President Barack Obama's remarks to the nation on Syria, Paul focused more on matters of fiscal policy and personal liberties, but even in these found arguments against taking action in Syria and most other foreign conflicts.

Paul suggested, as he had previously at a presidential debate, that the United States adopt the "Golden Rule foreign policy" -- that is, don't do anything on foreign soil that we wouldn't want done on U.S. soil.

The suggestion got a round of applause Tuesday evening.

"That wasn't the response I got at the debate," Paul said with a smile.

In taking his stands against wars of aggression, Paul said he has been called a peacenik. He seems to consider this simply a byproduct of "a policy of liberty and non-aggression."

"If it brings peace, why not give it a try?" Paul asked. "Because I think it's a good thing."

With peace also comes liberty. Paul allows that over the years, personal liberties have been curtailed, but wars have generally lasted a few years and gone away, with liberty returning in their absence.

A policy of perpetual war, first in Afghanistan, then in Iraq and now (possibly) in Syria, means personal liberties going away and staying away.

This means threats to liberty such as NSA wiretapping and extensive use of the 1917 Espionage Act are not going away as long as the nation is at some sort of war.

In speaking of liberty and non-aggression, Paul got to the heart of his message about what he calls the freedom movement. He said the movement, which values personal liberty, is based on two main principles: non-aggression and tolerance.

Non-aggression basically means leaving people alone in their personal affairs, provided they are not hurting anyone else. This includes not interfering in people's personal lives, their personal finances or in the affairs of other governments.

Paul said tolerance does not mean endorsing ideas with which we do not agree. It comes from a belief that we, as humans, don't have the moral authority to regulate the personal lives of other people.

In adopting these ideas, Paul said the country can get away from the spending increases and bigger government that he sees as only wasting money and inhibiting citizens' liberties.

"I would say that in Congress, 98 percent of the people who vote for spending increases do so with good intentions," Paul said.

However, this "welfarism" is a failing system, in his estimation.

With a $16.99 trillion national debt, at some point the country will have to solve the deficit problem. And while many in Washington say that making changes will require sacrifices from everyone, Paul disagrees.

Instead, he believes making government drastically smaller, restoring civil liberties and giving back money taken from individuals in taxes would actually make life easier for most citizens.

He said that many of the laws on the books take freedoms away from citizens and exist in contrast to the U.S. Constitution, which was written to limit the power of government.

While Paul's words alone convey a basic distrust of the decision makers in the country, they are delivered with a gleam in the eye and a fundamental optimism in his tone of voice.

This springs from Paul's continued belief in individuals.

"I assumed that people were going to stay sound asleep forever," Paul said. "Something's happened these last several years. A lot of young people have become very interested in the freedom movement. They're concerned about the country and they want to do something about it."

Several times speaking glowingly of "this current generation," the 78-year-old connected well with the college students young enough to be his grandchildren.

The students returned Paul's enthusiasm with standing ovations before and after the speech, several rounds of applause and even an impromptu cheer that erupted from somewhere in the balcony shortly before the lecture began.

"There's reason to be very optimistic in this country," Paul said, continuing that the reasons come from people like his audience, not from Washington.

"I think we're on the right track," he said. "I think this country is going to wake up and do the right thing."