'Wish You Were Here' thrills until the end 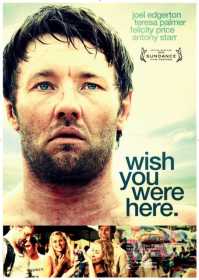 I love films that teach us good life lessons. "Taken" taught me never to let Liam Neeson around a pair of nails when he's really pissed off. "Fast Times at Ridgemont High" taught me that I'll never be able to look at a red bikini without thinking of Phoebe Cates. And finally, "Star Wars' taught me, of course, to always let the Wookie win.

Now add Kieran Darcy-Smith's "Wish You Were Here" to that list. What did I learn from this flick? Simple -- getting wasted in a far off land is a really, really bad idea.

In "Wish You Were Here," Dave (Joel Edgerton) and wife Alice (Felicity Price) agree to accompany Alice's sister Steph (Teresa Palmer) and her boyfriend Jeremy (Anthony Starr) on a quicky vacation to Cambodia. But things go bad, when after a night of partying, Dave is seen staggering as the new dawn begins with speckles of blood on his face and chest.

After Dave and Alice return home, it's revealed Jeremy went missing on the trip, Steph has stayed behind and that's when the mystery really takes off.

Since returning from the trip, Dave is obviously struggling with something he's keeping from his wife and things don't improve when Steph finally comes home and reveals that she and Dave slept together on the same night Jeremy went missing.

Dave's life begins to unravel as his wife drifts further and further away and an investigation into Jeremy's disappearance shows that he may know more than what he's told anyone.

"Wish You Were Here" is an emotionally charged thriller that does a nice job of giving you just enough info to keep you hungry, but not enough to know what happened. Just when you think you know where it's going, Darcy-Smith changes direction and leaves you with more questions than before.

I've never been a big fan of flashbacks even when they're done well, but Darcy-Smith does a great job of allowing those moments to only heighten the tension even more.

Edgerton delivers a strong, emotional performance as the film's lead. I've been a huge Edgerton fan for years and he displays once again why he's an actor worth noticing. Palmer is another impressive young actress and is able to hold her own every step of the way throughout the film.

The biggest issue with the film is it builds too much tension in its middle act and when the ending comes, you feel let down. It's not a bad ending, but after so many questions are raised, it feels like the answers are dumped in your lap and you're shoved out the door. Thanks for stopping by and have a good night.

While the ending is a little too tidy, "Wish You Were Here" is a tight thriller that's definitely worth a watch. Darcy-Smith constructs a film that keeps you guessing, but fails to deliver on the ending.