Local runners in action at invite 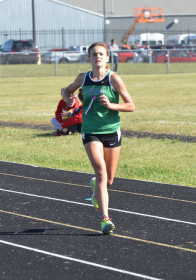 Cloverdale's Clare Plamondon paced the Clovers on Saturday with a 36th-place finish at the John Mitchell Invitational at Cascade. (Photo by TRENT SCOTT

CLAYTON -- The switch from mid-summer heat to a fall morning was a welcome change for cross country runners at the John Mitchell Invitational Saturday morning.

Cloverdale, North Putnam and South Putnam each made the trek to Cascade High School for the race, with the Eagles leading the county charge with a fourth place finish in the girls' race and fifth place result in the boys' competition.

Kieffer Vittetow finished 23rd for the Eagles, with Tyler Nield, Tyler Vandermark and Logan Vandermark each finishing inside the top 50 runners.

In the girls' race Madison Egold was passed by Monrovia's Kenna Hunter in the final few meters to place 11th.

"It was an OK day," Welti said. "The boys ran well and there's nothing to complain about today. They looked pretty good today considering we just had two meets this week.

"That's a lot on the body. This is their third race in four days and I'm proud of how they handled things."

Bret Brumfield led the boys' half of the race for Cloverdale with a 33rd-place finish. Ethan Manners came in four spots later, with Evan Monnett and Jake Waycott coming in 40th and 41st and Nolan Manners rounding out the Clover runners.

Clare Plamondon led the girls with a 36th-place finish with Laura Worthington coming in four places later. Chelsea Combs was edged out of a spot with the top 50 runners by North Putnam's Claire Dean, while Clover Izzy Monnett finished sandwiched between Brooke Smith and Kylee Detro of the Cougars.

Cloverdale head coach Andrew Tyler said that the squad needed their health and times to be all together at some point this season.

"The flu bug claimed Nick Blundell, who was the only runner to break 19 (minutes) so far this year," Tyler said. "Brumfield was close to breaking that today. Once we all get healthy, our goal was to have five guys break 20. We've gotten them to do that but we want to do it all in the same race.

"We looked good. Our form was looking better so we're progressing. Clare looked strong, as did Laura. I think we had personal-bests from all four girls today and we're thrilled about that."

Alexandria Land finished 43rd to pace the NPHS girls' squad. All four finished the race with their best times of the year. 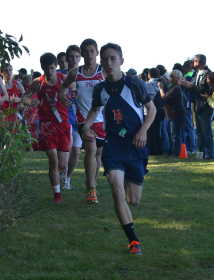 North Putnam's Michael Roach navigates a turn on his way to a 51st-place finish. (Photo by TRENT SCOTT)

North Putnam head coach Kevin Lutes said he was encouraged by the results.

"Our boys had a full team today, which was nice to see," Lutes said. "Our girls all had their best races of the year. We had several new racers get in today, but we've got a lot of work to do in the next couple of weeks.

"Alexandria was around 26 (minutes) today and did a great job. Michael Roach finished just over 20 today, which was good for him."

While Cloverdale races against Owen Valley Tuesday, North Putnam and South Putnam will join Greencastle at the Northview Invitational. Welti said there were two races to watch.

"We have one last race next week to determine who's going to be in our top seven for the conference meet," Welti said. "It's an intra-squad competition to determine who races for the last few meets."

"The kids have not run on that course before," Lutes said about the upcoming NPHS race. "It's fairly flat and with the better weather the kids should keep improving. Hopefully they'll know some of the runners they raced today and stay close to them. It'll be a new experience for them and we're looking forward to it."

Next Meet: Cloverdale travels to Owen Valley Tuesday. North Putnam and South Putnam will compete in the Northview Invitational Tuesday.