Connie E. Cress, 82, of Fort Myers, Fla., formerly of Plainfield, went to live with Our Lord on Monday, Sept. 9, 2013, passing away at Lee Memorial Hospital in Fort Myers from kidney failure.

Connie was born Feb. 11, 1931 in Marion County to the late Thomas and Dessie (Stevens) Cress in Bridgeport. 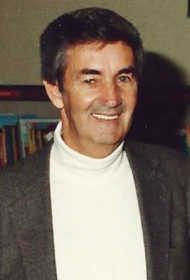 He is survived by his wife, Betsy (Wilson) Cress of Fort Myers; a daughter, Caroline Baer of Martinsville; a sister, Dorothy (Gerald) Edwards of Greencastle; and brother-in-laws Bill Nelson of Amo, and Max Marlowe of Plainfield.

He is also survived by three nephews, Brian Nelson of Plainfield, Bruce Nelson of Amo and Randy (Lisa) Davis of Greencastle; two nieces, Kathy Barnett of Noblesville and Paula (Jack) Sheets of New Palestine; and 13 great nieces and nephews.

Connie loved his God and church. He became a member of Amo Friends when he was 17 and served his church with all his heart. He also attended the Christian Church.

Connie graduated from Amo High School in 1949. He then entered Tri-State College where he played basketball. After one year he was drafted into the Army, where he spent two years in Georgia teaching communications.

After his tour in the Army he returned to school at the University of Indianapolis, getting his Bachelor of Science degree and on to Indiana State University for his Master's degree.

With the start of consolidated schools, he moved on to be principal of Mill Creek East Elementary, finally retiring from Mill Creek Schools as assistant superintendent.

Connie was a lifetime member of the Plainfield Elks.

Connie loved sports and it did not matter what it was, but of course basketball and golf were the top, although he played freshman football for Ben Davis before his family moved to Amo.

Most of his days were spent playing golf, nine holes in the morning and 18 in the afternoon, unless he was playing in a tournament. He won many a tourney.

Connie also loved to fly and did his first solo in August 1974.

Memorial services will be conducted at 2 p.m. Saturday, Sept. 28 in Hampton-Gentry Funeral Home, Plainfield, where friends may call on Saturday from 12:30 p.m. until service time at 2 p.m.

Inurnment will be in Maple Hill Cemetery, Plainfield.

Online condolences may be sent to the Cress family at http://www.hamptongentry.com.