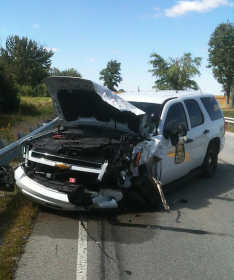 The crash reportidly resulted in non-life threatening injuries to a Missouri couple.

Tripp abruptly slowed and made a left turn in front of the trooper's vehicle, which was passing on the left.

Ames attempted to avoid impact by steering to right but collided with the right rear of the van.