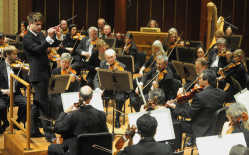 Krzysztof Urbanski conducts the Indianapolis Symphony Orchestra, which will perform Sunday in Greencastle.

For the opening concert of the 2013-14 Guest Artist Series, the DePauw University School of Music will present the Indianapolis Symphony Orchestra (ISO) with guest pianist Garrick Ohlsson.

The Sunday, Sept. 29 performance will take place at 3 p.m. in Kresge Auditorium of the Green Center for the Performing Arts. ISO music director Krzysztof Urbanski will conduct.

Ohlsson joins the ISO on the first half of the concert for Fryderyk Chopin's "First Piano Concerto," a virtuosic piece that encapsulates the composer's Romantic spirit at its best. The program is paired with Sergei Prokofiev's heroic "Fifth Symphony."

Since his 1970 win of the Chopin International Piano Competition, Ohlsson, a student of the late Claudio Arrau, has established himself worldwide as a musician of magisterial interpretive and technical prowess. Although long regarded as one of the world's leading exponents of the music of Chopin, he commands an enormous repertoire, which ranges over the entire piano literature, and is noted for his masterly performances of the works of Mozart, Beethoven and Schubert, as well as the Romantic repertoire.

Currently in his third season as music director of the ISO, Krzysztof Urbanski, the youngest person ever to lead a major North American orchestra, recently extended his commitment as the artistic leader of the orchestra through the 2017-18 season.

The seventh music director of the Indianapolis Symphony began his tenure with the ISO in September 2011 under a four-year agreement. Urbanski, now 30, graduated from the Chopin Music Academy in Warsaw in 2007. In the same year, he was the unanimous first-prize winner of the Prague Spring International Conducting Competition.

The dynamic Polish-born conductor considers directing an American orchestra a fulfillment of his life's dreams.

"With still so much to accomplish, the decision to stay felt right to me," Urbanski said. "This orchestra is filled with great talent, and this city loves the music that we make. It's an honor for me to continue as artistic leader and be a part of this orchestra's future."

Due to public enthusiasm and demand in Greencastle, Urbanski and the ISO are returning to the DePauw campus for two Sunday performances this season -- Sept. 29 and again on Feb. 9.

As ISO concerts often sell out, the box office encourages people to get tickets now. General admission is $10 in advance and $15 on the day of the concert. Tickets for all students, children and seniors over 65 are free.

For additional information or assistance, drop by the Green Center box office, (noon--4 p.m. and 6--8 p.m. Monday through Thursday, and noon--4 p.m. Friday and Sunday), visit www.depauw.edu/music/tickets or call 658-4827.

Those who would like to attend a DePauw School of Music performance but are unable to pay the general admission price for adults, there is a "Pay-What-You-Can" option available. If purchasing tickets online (www.depauw.edu/music/tickets), click on the "Purchase Tickets" link next to the preferred date and proceed to checkout. The "Pay-What-You-Can" option is also available on request at the Green Center box office (605 S. College Ave.) to any patron who requests it.