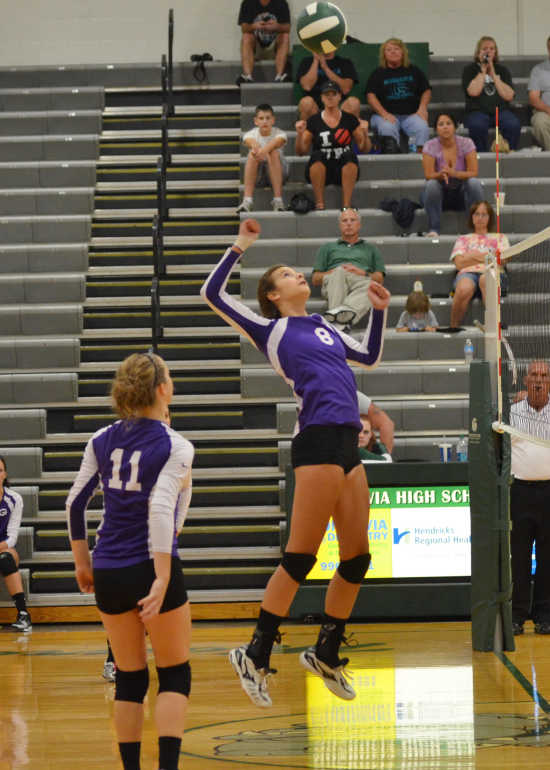 Greencastle junior Quinci Miller goes up for a spike during the match at Monrovia on Tuesday. Miller finished with 11 kills. (Banner Graphic/TRENT SCOTT)
Order this photo

MONROVIA -- Two-thirds of the way through the season and playing its fourth road game in a five-game stretch, the Greencastle volleyball team finally played its second West Central Conference match of the season at Monrovia on Thursday.

The Bulldogs, sporting only three wins on the year coming into the game, made life extremely difficult for a shorthanded Tiger Cub squad but ultimately fell to the visitors 25-20, 28-26, 14-25 and 31-29.

Greencastle was without junior Kennedy Downing in the backline rotation and junior Olivia Divine along the front line and with the squad rotation needing to accommodate the gaps, the Tiger Cub offense fell into a rut midway through the match.

The Tiger Cubs' attack flowed primarily through juniors Quinci Miller and Jessica Lenihan, but that was more than enough in the first set. Greencastle broke a 13-13 tie with a quick 6-0 run that and made the advantage stand to win the first set by five points.

Even though the first set went well, Greencastle head coach Maggie Walters said signs were evident that the night was going to be a difficult one.

"The first set went pretty well but we struggled to keep a lead," Walters said. "We had a five point lead early in the set and would have had a big lead later in the match. We just couldn't keep the lead.

"We made errors and could not control the ball on our side of the net."

With a pattern established, Monrovia began to anticipate much of the visitors' attack and made it difficult for Greencastle to gain an advantage in open play.

Leading 20-13 in the second set, the hosts should have been able to put the set away. Greencastle, unable to beat Monrovia at the net, instead pulled itself back into the match with a punishing service game.

The Bulldogs struggled to return serves and the seven-point advantage eventually disappeared when the Tiger Cubs tied the set at 23-23.

Nerves got the better of both sides as serves hit the net, returns sailed away and shots went wide over the next eight points. Eventually Miller ended the set with a kill to take the round 28-26 and set the visitors up with a 2-0 lead in the match.

Walters said the Tiger Cubs could have folded but held their nerve while Monrovia lost theirs.

"They never gave up," Walters said. "They were down seven points and many teams might have said, 'Well, we're going to give up,' but these girls never did. That's why they won."

Greencastle carried the momentum of the second set and turned it into a 5-2 lead in the following round. Once Monrovia took the lead at 6-5, however, the Bulldogs put a strong effort in and would quickly rout the Tiger Cubs, finishing the set on an 11-4 run to cut the match deficit to 2-1.

With the offense sputtering badly in the third set, the visitors started the fourth with a string of strong serves that left Monrovia scrambling to get a ball back over the net.

Walters said that serves from juniors Taylor and Delanie Stoltey, along with senior Danielle Thomas, threw Monrovia out of sync.

"Our servers were huge," Walters said. "They took their passers out of the game and they couldn't send the ball back."

With a 19-8 lead, Greencastle seemed to be secure in winning the set and the match. Instead, the Tiger Cubs nearly smashed the panic button to pieces.

The Bulldogs slowly began to pull points back and cut the lead to 22-14. The visitors' service touch suddenly abandoned them and, much like Greencastle had done in the second set, Monrovia rallied to tie the match at 24-24 and took the lead on the next point.

What followed was an incredibly tense and emotional series of back and forth points as both sides focused on getting the ball over and waiting for the other to make a mistake.

Greencastle showed its ability to find offense in a clutch situation in the end. Allison White scored consecutive points on a kill and ace to pull the Tiger Cubs ahead at 28-27. Miller applied the finishing blows with a pair of kills that ended the match and sent the visitors to 2-0 in WCC play.

Miller had eight kills on the night while Lenihan compiled 11 kills to lead the attack. White led the defense with 16 digs, while Thomas added 15 and Taylor Stoltey and Miller had 12 apiece.

"It's huge to win on the road," Walters said. "This win should help build their confidence a lot heading into the last few weeks of the season. ... The girls are really up right now.

"They realize when they have a lead they need to keep it, but they're excited that they came back and they're ready for more conference games."

Next Match: Greencastle travels to Danville next Monday.