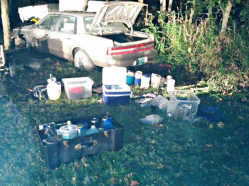 WAVELAND -- A tip led Indiana State Police Troopers to a Thursday evening drug bust that resulted in the arrest of six individuals.

Around 8:30 p.m., members of the Putnamville District Meth Lab Suppression Team converged on a residence at 6060 N. Saddleclub Rd. in northeastern Parke County.

They located an active methamphetamine lab in the bed of a pickup truck and one in the trunk of an abandoned car, as well as just over 10 grams of finished product.

Troopers also recovered four long guns and two handguns, with one of the long guns having the serial numbers filed off.

Trooper arrested six individuals and placed them in the Parke County Jail, including Larry Kelly, 54, of Waveland, the owner of the residence.

Each of the subjects faces four felony charges: Class B felony manufacturing methamphetamine, along with possession of methamphetamine, illegal storage of anhydrous and dumping controlled waste, all Class D felonies.

Kelly was charged additionally with felony possession of a firearm with altered serial number and maintaining a common nuisance, D felony

Mashburn, Thayer, Cook, Harris and Hayes were additionally charged with visiting a common nuisance, A misdemeanor

Mashburn was also charged with felony possession of a firearm by a convicted violent felon.

Anyone wishing to report suspected meth activity in the six counties of Parke, Vermillion, Vigo, Putnam, Clay and Sullivan can do so anonymously to Putnamville Post at 653-4114. All tips will be investigated.