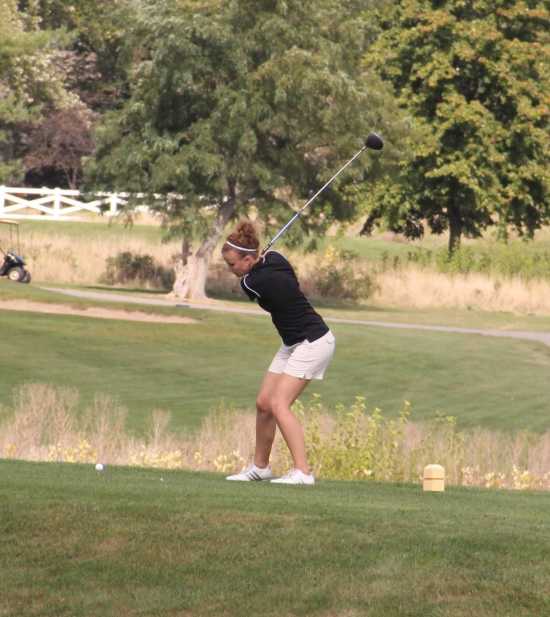 Cloverdale sophomore Harlee Fuetter hits a drive during the back nine at Smock Golf Course, site of the IHSAA golf regional on Saturday. (Banner Graphic/GRANT WIEMAN)
Order this photo

INDIANAPOLIS -- Cloverdale's Harlee Fuetter chipped in to save par on her first hole at the Indiana High School Athletic Association regional on Saturday, showing patience, maturity and grit.

Not bad for a sophomore who didn't expect to get past sectionals when the season began six weeks ago.

"I never expected this at all," Fuetter said. "Being a sophomore and being able to make it this far is huge."

Fuetter finished her round with a 94, 11 strokes away from qualifying for next week's state finals.

It was a long, grueling day at Smock Golf Course. Her round started 20 minutes after the scheduled tee time and took nearly six hours.

"She kept grinding the whole way," CHS coach Matthew Langdon said. "Today really shows where she's at with this level of competition and allows her to work for the next couple of years."

Fuetter's style, no matter what the conditions, is to be a patient golfer and keep the ball in play. That patience was tested with a five-minute wait on nearly every tee box.

The weather was perfect, but the slow play made it tough to string together momentum or, after a rare bad hole, get momentum back.

She made the best of it. Playing three other golfers, each for the first time, Fuetter led the group and passed the time joking with her competitors.

Fuetter was the low-scorer in her group, which included Ashleigh Davids (Beech Grove, 96), Kelsey Reeves (Southwestern, 106) and Heather Ruby (Southmont, 106).

"I always have a really good time golfing with new people," she said. "It was just a really long, exhausting day." 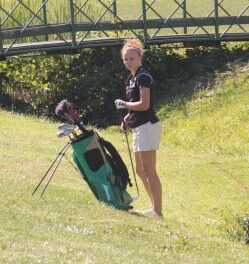 Harlee Fuetter analyzes the course during a stop in action. (Banner Graphic/GRANT WIEMAN)
Order this photo

Having fun and gaining experience at the event was the most important part of the whole day, Langdon said. This marked the fourth year in a row that Cloverdale has had an individual qualify for regionals. Sydney Shrum, now a freshman golfing at Valparaiso, gained her first regional experience as a sophomore in 2010.

Langdon said he took from what he learned coaching in the postseason the last few years and passed it along to his young golfer.

"I think it's a part of the process; not many girls come here their first time at regionals and get to state," he said. "I was able to pass Sydney's experience along to her. 'Everything you can get out of today, get out of it because if you can get back here your junior and senior year you can set some new goals for yourself.'"

Zionsville's Lucy Stevens was medalist. She finished at 72. Fuetter had the 10th-lowest score for an individual qualifier. Starting on the back nine in the second-to-last group of the day, she finished both sides at 47 and no holes worse than seven strokes.

The round wasn't Fuetter's best of the year -- she had a 90 at sectionals last week and made the all-county and all-conference teams -- but it set a high bar for her future.

Fuetter began this season expecting to compete and work hard. As a junior, she'll be expected to succeed.

"At the beginning of the season she may not have thought this was possible," Langdon said. "She'll put a good offseason in and I think she'll be happy to try and get back here next year and maybe have a little different goals if she can make it back."

That pressure is just fine with the Fuetter. She knows what it's going to take to get back, and making regionals this year only made her want a return trip even more.