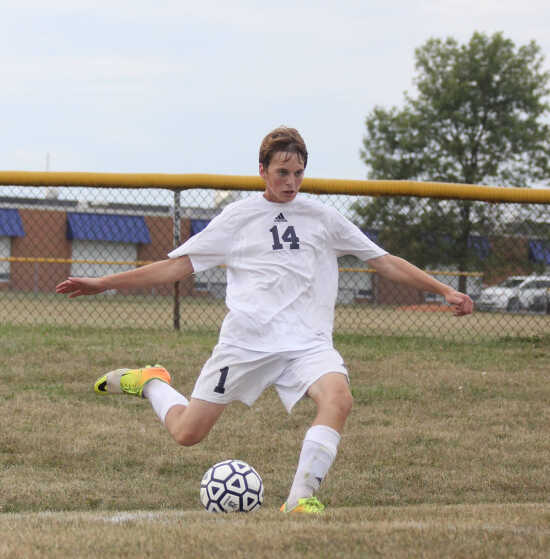 Nate Woolums was one of the Cougars celebrating senior night on Wednesday. (Banner Graphic/GRANT WIEMAN)
Order this photo

The senior class carried the offense for the Cougars and NPHS coach David Moeller said the class greatly influenced the underclassmen this season with their work ethic and their never-give-up attitude.

"The seniors are definitely are going be a big loss. They all have such composure on the ball and they play key positions on the field," Moeller said. "This years senior class was a good group of guys.

"They were all hard workers and you could see it from the effort they gave on the field."

The offenses Wednesday began with a high-octane attack. All the goals came in the first half, including three inside the first five minutes of the game.

The scoring opened up with Monrovia getting on the board first but Cougar senior Bennett Hazelgrove quickly answered back with a score of his own to tie the game 1-1.

The Bulldogs scored three more times before the Cougars answered back.

"They had a really fast guy at top and that's what we struggled with the past few games," Moeller said. "We still need to get our defending down."

Senior Zach Hunter went to the PK line and drilled one into the back of the net to cut the deficit down to 4-2 entering halftime and that total stood for the final 46 minutes.

The defenders for the Cougars had trouble getting to their man and gave the Monrovia offense had quite a few breakaways, but when the Bulldogs had their chances they could not convert them into goals.

"Right now the issue is marking up and converting those opportunities into goals," Moeller said.

The Cougar seniors played to their fullest capabilities but just could not knock off the Bulldogs. North Putnam had a great run during this regular season and look to build on their success this postseason and translate it into next.

"We have people that can step up into those holes but those are hard to replace," Moeller said.

North Putnam begins sectionals on Wednesday against South Vermillion at 7 p.m. The sectionals are hosted at West Vigo High School.