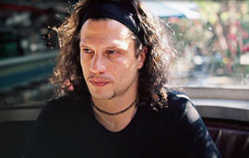 Otero will be joined in concert by Pablo Asian (bass), Gabrielle Fink (violin) and Juan Pablo Jofre (bandone--n) in the second performance in the DePauw University School of Music 2013-14 Guest Artist Series.

The concert is set for 8 p.m. Friday in Kresge Auditorium within the DePauw Green Center for the Performing Arts.

A classically trained bandleader who found his voice as a musician at a young age, Otero began to incorporate native Argentine music into his work, often learning as much from sounds he heard in the street and from the jazz and rock recordings his older sister brought home as from his formal music instruction.

In his developing sound, Otero later added the bandone--n, the accordion-like instrument at the heart of all tango music, and created his first project, a quintet called "X-Tango," a vision of which he has pursued ever since.

Growing up in South America, the composer's home was steeped in music. His mother, Elsa Marvel, was an internationally successful opera singer, as was his maternal grandmother.

"Music at home was very natural," Otero said. "We had a piano, and everyone was singing and playing -- my mother, my sister, me. I didn't even think about being a musician or not. I just was a musician."

He also began experimenting early on with recording, realizing, for example, that in the bathroom he could get a natural reverb sound.

"I had two cassette tapes that I would use for overdubbing ... I'd stay there, making music -- singing, playing guitar or small drums, whatever portable instruments I could get in there," Otero added.

As a result, he was soon being invited to mix and produce recordings for other local musicians.

More concerned, however, with making music than with self-promotion, Otero's work was considered an insider secret for many years, unknown to the world at large, with his CDs circulated among a small circle of fellow musicians.

One night, after a solo piano concert in Los Angeles, legendary producer and composer Quincy Jones came backstage unannounced, offering advice and encouragement, along with an open invitation to perform with him on a project.

"It was if Santa Claus had arrived backstage," Otero recalls.

General admission to the concert is $10 in advance and $15 the day of the event. Tickets for all students, children and seniors over 65 are free.

To purchase tickets, persons can visit the Green Center box office (open noon--4 p.m. and 6--8 p.m. Monday through Thursday, and on Friday, from noon--4 p.m. or one hour prior to the performance), or go to www.depauw.edu/music/tickets.