A return to campus as the featured Old Gold Day speaker and Ubben lecturer Saturday at DePauw University was quite a trip down memory lane for Fox News anchor Bret Baier.

The 43-year-old journalist cut his fair-and-balance teeth at DePauw as a member of the Center for Contemporary Media's first anchor team for the newscast "Evening Edition" more than 20 years ago. Saturday he returned to share his journey and political observations with both current students and loyal alumni. 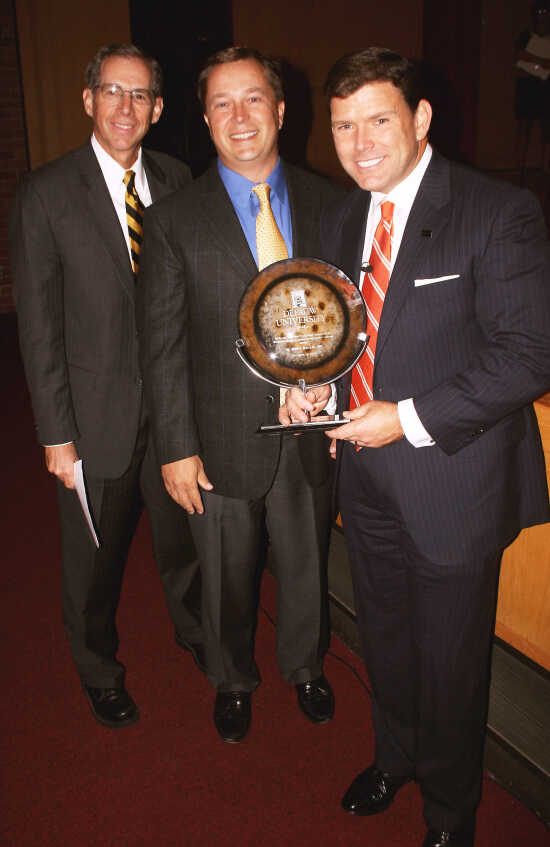 Baier, whose national newscast ("Special Report with Bret Baier") is seen nightly by more than two million cable viewers, was jolted back to simpler days by an old black-and-white Banner Graphic photo that adorned the cover of the newspaper TV section in 1992.

At the podium in Kresge Auditorium, he held up that same slightly yellowed photo, telling his Ubben Lecture audience, "It was very funny to get this today because I recently found a tape (of an "Evening Edition" newscast) in a drawer at home, and put it in (to play). It was horrific. Painful, very painful.

His experience at DePauw -- praised the 1992 graduate who was an English (composition) and political science double-major at DePauw -- has helped make him "who I am and what I do," Baier told both a morning press conference and his public audience.

"I really fell in love with covering politics," he said, acknowledging it took him a while to get back to following the political arena as he bounced around small-market TV.

That stopped when he forwarded an audition tape to the fledgling Fox News organization in 1998, and a return to political coverage came along for the ride.

"I largely credit that (interest in politics) to my passion for that DePauw class and Ken Bode," he said.

"The place looks a lot different," Baier said, alluding to all the changes on campus, including the new Anderson Street entrance and ongoing renovations.

And now Starbucks on the courthouse square?

"That's pretty big," he said, cocking his head to smile while holding up a venti-size Starbucks coffee for all in the press corps to see.

"I spent a lot of time at Moore's Tavern," Baier offered up, continuing to reminisce. "Is it still there?"

Of course, Moore's Bar is still there, a Greencastle institution itself.

"The town feels a little bit smaller," suggested Baier, who, of course, spends most of his time in Washington, D.C., these days.

"When I was here, it seemed bigger," he said of the community. "But it was such a great start for me. It really did help to form who I am and what I do."

Prior to giving his Ubben Lecture, Baier was presented with the 2013 DePauw Distinguished Alumni Achievement Award for Media by Brent St. John, president of the DePauw Alumni Association.