Pendulum of politics due to swing around again on news, Washington, Baier believes

"Washington is a place where they spin everything," Baier told a Kresge Auditorium Ubben lecture audience estimated at 675. "Every side has an angle. It's like three-dimensional chess." 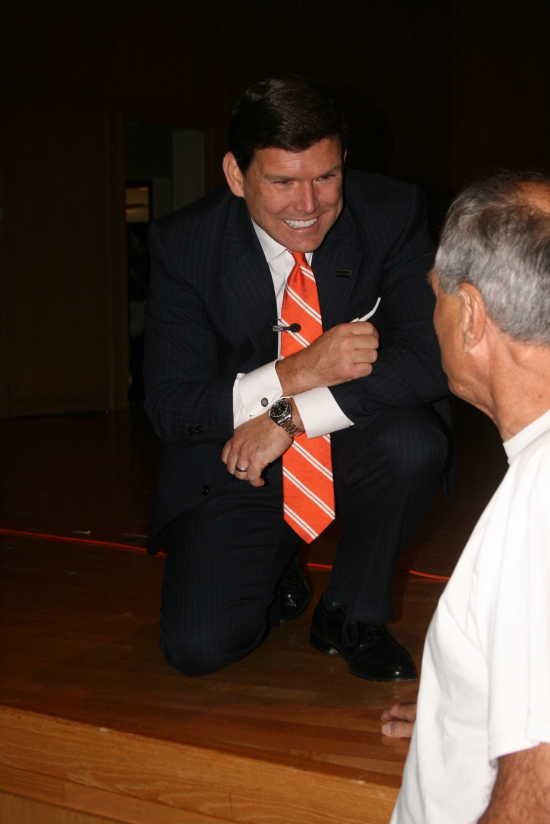 Following his lecture Saturday, Bret Baier chats from the stage of Kresge Auditorium with 1969 grad Jim Tomsic, whose pledge father at Delta Upsilon was Baier's father, Bill Baier, Class of 1967.
Order this photo

The public he meets in cafes and on street corners across America is tired of all the political posturing in Washington, he assured.

"'Throw them all out' is what I hear in diners across the country," Baier said.

"I think the pendulum is about to swing back to a moderate, middle-of-the-road type candidate," the 20-year news veteran predicted, adding that at some point somehow, some candidate will emerge to swing the country back the middle.

Stopping short of saying that could also bring political reporting full circle and eliminate, or at least blur, the conservative and liberal labels Fox News, MSNBC and CNN have acquired, Baier was blunt.

Fox News, he said, "is clearly a conservative network."

"I'm certainly not going to try and convince you Sean Hannity's a liberal," he said to chuckles from the Kresge crowd.

In recent years, Baier allowed, the line between straight news and opinion has become blurred as cable TV and the Internet provide ever-increasing new information options.

"Listen," he added, "people meld opinion and news together ... They think sometimes it's just one animal.

"So there needs to be a separation in the mindset that there is a news section and opinion section -- just like a newspaper."

For example, he sees his news hour -- "Special Report With Bret Baier" -- as a straight news show featuring a panel discussion. That, he asserts, sets it apart from some other so-called news shows.

To some viewers, he admitted, it doesn't matter. An older woman came up to him in an airport, Baier shared, to tell him, "I love your channel. You report and let me decide," she told him.

"Marketing," Baier said, lowering his voice as if to address that department of Fox, "it's working ..."

Changes, however, are coming, he said.

As part of his Saturday presentation, Baier engaged in an on-stage conversation with Jeffrey M. McCall, DPU professor of communication.

McCall asked about getting young people interested in important news again instead of them relying on Jon Stewart to provide insight while spending more time checking out fantasy football scores or following Miley Cyrus' latest escapades.

"Miley Cyrus will not affect your life long term," Baier said to more laughter from the audience "Those things are flashes in the pan.

"When the Supreme Court weighs in on something, it is changing the country. When Syria is about to explode and the Middle East is a powderkeg, those are things that could change your life dramatically.

"If there's a major war in the Middle East and the price of oil goes through the roof, guess what, you're not going to be able to fuel your car to get to the Miley Cyrus concert," he stressed.

Like that pendulum of politics he addressed, Baier himself showed he can swing from serious to humorous in the course of a nearly 90-miute program.

He told about being lured to a fledgling Fox News Southeast Bureau, which in its early days was literally housed in his apartment and operated via cell phone and fax machine.

Baier has gone on to become national security correspondent and chief White House correspondent during his 15 years at Fox News. "Special Report With Bret Baier" has the No. 1 rating in its time slot with two million viewers or more tuning in nightly.

Yet asked about his most interesting interview, Baier ignored customary political figures and heads of state and went with a Parrothead.

"I was there for another story," he explained. "I asked him for an interview ... the whole thing was surreal."

After a pause for effect, Baier smiled and added, "I had a margarita afterward."

Newsmen undoubtedly have to be good storytellers, and Baier certainly showed that side of himself in his return to campus.

He talked about interning during his junior year at DePauw with anchorman Bernard Shaw at CNN just before Shaw famously went off to cover the initial bombs being dropped on Baghdad in the first Gulf War.

"I wrote a little bit," Baier deadpanned of his duties, quoting as an example of his work as, "Welcome to 'Inside Politics,' I'm Bernard Shaw."

"I wrote that, and I brought Bernie Shaw his popcorn at break," he said, noting that it seemed an interesting choice for a news anchor with the prospect of popcorn hulls finding their way into your teeth.

Baier said he recently ran into Shaw and reminded him of those days as an intern, which prompted Shaw to reply, in his best James Earl Jones "this-is-CNN" voice-of-God tones, "So, who gets you your popcorn?"

But perhaps Baier's best comedy relief came from a story he shared about the early days of taking over the "Special Report" broadcast from Brit Hume on Jan. 5, 2009.

The first show seemed perfect, he thought, until he went to his computer and found dozens of emails complaining not about news content or delivery but how wrinkled his pants looked.

The Fox game plan in those days called for the young anchorman to stand in front of a changing news backdrop to present the story.

"You're a wrinkled mess," one email noted, while others said something to the effect Brit Hume would never be caught dead with wrinkled pants.

The second day, he got "something like 500 emails," all essentially with the same criticism about wrinkled pants.

So a system was put in place where he brought an extra pair of trousers to the studio to change into while an assistant ran his suit pants to a nearby cleaners for last-minute pressing.

That seemed to solve the persistent pants problem. Until the day his assistant had to be off, and the duty was left to an intern.

Baier recalled sitting at the computer as news time approached and finding a rather provocatively pointed email from a woman whose name he did not recognize.

All it said, he recalled to more laughter from the Kresge crowd, was "I'm ready to take your pants down now."

"I thought, 'My, how aggressive,'" he recalled before quickly acknowledging he soon figured out the email had come from the intern.

"We started sitting at the desk soon after that," he noted.

Returning to the serious side, Baier also recalled receiving career advice from the late longtime ABC News correspondent John McWethy, a fellow DePauw graduate (1969), who urged him to leave his work at the front door with his top coat when hanging it up on his return home each night.

Baier understands that advice fully. His son Paul, now six years old, was born with five congenital heart defects and has undergone several surgeries, including one just a few weeks ago.

"That changed my perspective on everything," especially on Washington politics, Baier said Saturday.

"There's so much more outside of that place and all of those talking points and all the back and forth. Hopefully, I bring some of that to the anchor desk."