New York City coined the term in the early 1800s, forever confusing travelers who never seem sure whether they're uptown or downtown.

Petula Clark sang about it in the mid 1960s, implying downtown was some magical place where "things will be great when you're there, no finer place for sure ..." 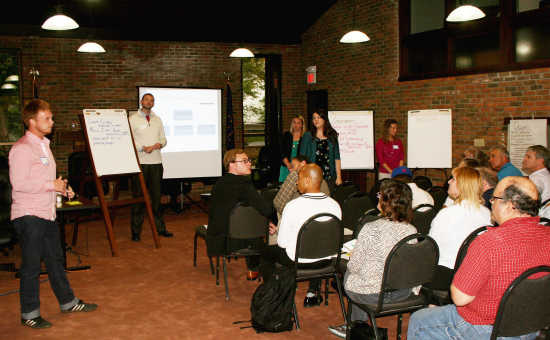 And Main Street Greencastle is trying to redefine and revitalize downtown as we speak.

Of course, city residents and city officials would love it if the lights truly were much brighter and everything was waiting for you, as the British pop star suggested in her signature song.

But the realities of downtown and what local people imagine it could or should be lured nearly three dozen people to City Hall last week.

The encouraging news already is that Main Street Greencastle has been reactivated and restored to the good graces of the Indiana Main Street program after 18 months of planning and execution.

A new board of directors was introduced with Christian Shuck serving as president, Matt Mascioli as vice president, Nicole Christlieb as treasurer and Tanis Monday as secretary. New board members include Sam Hirt, Alia Hazel and Andrew Smith.

With a mission to "ensure a vibrant and viable future" of the downtown -- defined as bounded by Jackson Street on the west, Bloomington on the east, Shadowlawn on the north and Seminary on the south -- the area was addressed often at recent community summit gatherings, Shuck noted.

Among statements relating to downtown that emerged from that assembly of community leaders were the need to:

-- Facilitate a full market study of the downtown since the most recent one is seven years old and far removed from the reality of the Stellar Grant impact and the arrival of Starbucks and Eli's Books.

-- Identify what the community believes the business district should look like.

-- Identify events the community can support and/or start downtown.

-- Identify portions of the downtown remodeling that Main Street Greencastle can help sustain.

"There's a lot of amazing stuff we already do," Shuck said, urging the group to consider ways to build upon those efforts and create even more and better things to do while capitalizing on the ongoing momentum downtown.

One specific idea suggested was to try a juried art show in the downtown, while another vision stressed coordinated business hours with stores and businesses staying open when events like the Farmers Market, Music Festival, Fair Parade and others bring big crowds to the square.

Main Street and the downtown business owners need to "ensure we're targeting the people most likely to take advantage of it," Geabes explained.

Surveying local youth was also suggested with the notion that teenagers have disposable dollars to spend yet their impact seems to be dismissed when events and activities are being planned locally.

Developing and encouraging the "walkability" of downtown Greencastle was another point raised, while still another suggested the need for better signage to steer visitors to public parking areas.

Still, getting people to linger downtown and saunter around the square is always compounded by the noise of truck traffic that rumbles through the downtown, disrupting conversations, drowning out music and overall creating traffic and safety headaches.

"You're not going to get people walking or riding bikes downtown without getting rid of the truck traffic," Tavia Pigg said from the audience.

She said she was sitting in a downtown restaurant one day a while back and "counted 47 trucks in 10 minutes."

That problem isn't likely to go away any time soon, given the cost of constructing roadways and the virtual pipedream that a bypass might one day take U.S. 231 out of the downtown.

"They're not going to build us a road," Mayor Sue Murray assured. "INDOT (Indiana Department of Transportation) doesn't have us anywhere on its radar. I wish I could say it's better than that, but it's not."

The mayor closed the "Imagine Downtown" brainstorming session by stressing the positive as the Stellar Project nears its completion and new businesses arise through "dreaming and passion."

She pointed to Myers' Market as a milestone development and Eli's and Starbucks as anchors of a new downtown, while reminding the group that DePauw University annually brings 60,000 visitors to this community.

And when those visitors or prospective students or sports spectators want to buy a DePauw sweatshirt, they now go downtown. Or when they feel the urge for a frappuccino or a grande caramel macchiato, they will be heading to the square.

It is up to Greencastle to capitalize on what is occurring, Murray said.

"We need to dream big," the mayor stressed. "We need youth and enthusiasm and new ideas. But it's got to be your dream."