Cougars knocked out in sectional final with 4-0 loss 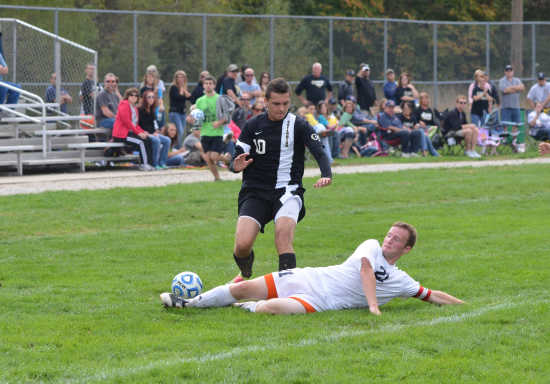 TERRE HAUTE -- North Putnam's boys' soccer team was facing a familiar and unfamiliar challenge when it stepped back on to the field at West Vigo Saturday morning.

The Cougars had already faced and lost to opponent Covington earlier in the season but they had a chance to rectify that result in an unfamiliar situation: a sectional final.

Three first-half goals from the Trojans, however, were more than enough as Covington won its second straight sectional by downing the Cougars 4-0.

North Putnam head coach Eric Moeller said that he entered the game believing keeping the Trojan forward line under wraps would be key during the match.

"We played Covington already this year and (Zeb Newlin) had scored three against us in that game," Moeller said. "We wanted to limit his opportunities. I told the guys to make sure we had a body on him."

Much of the play in the early going spent time in Covington's half as North Putnam looked for a way through the midfield. At the same time, the Trojans looked to get behind the Cougars' high defensive line.

While North Putnam's offense had difficulty getting balls toward goal, the rearguard kept Covington at bay by getting nine offside decisions called against the Trojans.

In time, however, Covington was able to break the offside trap and got the first goal of the game from their first real opportunity.

Newlin was played through on goal and after initially losing control of the ball in a challenge with Cougar goalkeeper Jake Holtze, Newlin regained his balance and slotted in for a 1-0 lead.

Moeller said the defense did well to keep Covington in check as long as it had.

"Covington did a good job of playing balls in behind us," Moeller said. "(Newlin eventually beat us with his speed, but that's one of the risks of playing an offside trap."

Covington doubled the lead within a minute after North Putnam failed to deal with a ball in their defensive third, allowing Justin Long to get on the ball and slot underneath Holtze.

The Cougars came back into the game but were again breeched eight minutes from halftime. Newlin again beat the offside trap and beat Holtze to his right to give the Trojans a comfortable 3-0 lead.

Heading into the break, Moeller said the squad was working hard if not making the passes to reward the work.

"We couldn't find the forwards with the ball," Moeller said. "We could not get passes to our forwards' feet. We were passing into space, hoping someone would run onto the ball.

"We had to come out of halftime improving on that and keeping up the intensity. We wanted to win the challenges, not letting the ball bounce in the defense and not panicking when we had the ball at our feet."

After the break, North Putnam grew into the match but still had difficulty finding a pass to set up the forward line.

Zach Hunter had the best chances for the Cougars. Twenty-five minutes into the second half, Hunter hit a fierce drive that slammed off the Covington crossbar, much to the relief of Trojan keeper Dylan Moore.

Hunter missed another chance four minutes later when he latched onto a ball down the left hand side but sliced his shot under pressure.

Covington added gloss to scoreline a minute after Hunter's miss after a cross from Ermir Bektesoski to Newlin, resulting first in a save by Holtze then a block by Trevor Troyer. Josh Allen came in late to sweep home a goal on the third attempt, allowing the Trojans to increase the score to 4-0.

The Cougars looked for a route to goal but none appeared and as the clock ticked down to zero Covington secured its second straight sectional title.

Though the squad finished the season on a sour note, Moeller said that the sectional game win and the performance during the season bode well for the squad in the future.

"This game will give us confidence heading into next season," Moeller said. "As far as I know, we had not won a sectional game until this year. That was important.

"It helped break a mental hurdle and we know we can make it to the sectional final. It will help us as we work during the off-season.

"We do lose a great group of seniors," Moeller added. "We have guys that can step up in the same positions next year and will look forward to being on the opposite end of the scoreline next year."