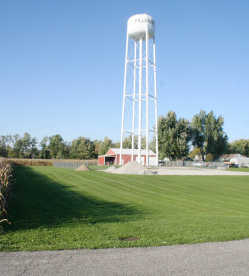 The efforts of volunteers from Bethel Baptist Church will soon turn the land surrounding the Fillmore water tower into the Fillmore Town Park. The town council has approved a plan by church representatives to make several improvements to the area, including playground equipment, a shelter house and trees.

FILLMORE -- The path to a better community is feeling pretty smooth in Fillmore right now.

On the heels of the storm sewer and repaving project on Main Street, a local church group is moving forward to establish a town park.

The council met in a special session Wednesday afternoon to discuss the plans with Beth Tharp, representing Bethel Baptist Church.

The idea is for volunteers from Bethel to take the 0.8-acre L-shaped piece of town property surrounding the town water tower and utility building and turn it into a park.

Bethel Baptist has several small groups that get together not only to study and fellowship, but which also take part in service projects.

The idea originally came from church and community member Roger Bailey, and others such as Chad Glaze and Tharp are running with the idea.

Tharp said 40 to 50 church members have committed to working on the park this fall and next spring. She outlined for board members some of their plans.

During the fall, volunteers plan to erect a five-foot chain link fence on the north, west and south sides of the property. They also plan to plant trees, install parking bumpers and lay a mulch pad for a playground area.

In the spring, the playground equipment will be built, along with a "Fillmore Town Park" sign and a shelter house with picnic tables.

Council members will check into any needed changes to the town's liability insurance and erecting a security light for the area.

Council president Alan Jones also assured Tharp that some piles of rock on the property can easily be moved by spring.

Additionally, Jones plans to build two concrete and wood park benches for the park. He has recently built four others for the town.

Not only did Eagle Valley Construction recently complete the storm sewer and repaving project on Main Street, the company volunteered to resurface the town hall parking lot with excess blacktop.

Besides this, the town would be responsible for upkeep, along with the power bill associated with the security light.

Tharp did say she hopes the church will continue to work on the area in the years to come.

"I hope that it's an ongoing project," Tharp said. "Hopefully we'll come in every year and kind of spruce it up."

The park proposal is the latest in a number of community service projects Bethel Baptist has undertaken in recent years, including providing school supplies to local students, raising funds for the Fillmore Fire Department, support of the Helping Hands Clothing Ministry and other outreach projects.

In other kid-friendly news, the council established trick-or-treat hours, which will be from 5-8 p.m. on Thursday, Oct. 31.

Besides repaving the street, Eagle Valley installed aprons at side streets and even volunteered to resurface the town hall parking lot with leftover blacktop mix.

VanRensselaer praised Eagle Valley, engineer Lorie Young and grant administrator Kristy Jerrell, all of whom were instrumental in the success of the project.

She also noted the tireless efforts of Jones and other local volunteers like him. Also not lost on her are the efforts of the three local churches, Bethel Baptist, Fillmore Christian and Fillmore Methodist.

"Now I'm excited. It looks so much nicer," VanRensselaer said. We have some good churches and community builders."