Sawyer Arnold, a senior at South Putnam High School, is a two-way football player and guard on the Eagles' basketball team. His favorite hobbies are to play and watch sports, but he also enjoys working on family farm, which takes up a large chunk of his time in harvest season.

He has three siblings: an older brother, Seth; a twin brother, Tayler; and a younger sister, Olivia. His club memberships include: Future Farmers of America; Fellowship of Christian Athletes; Family, Career and Community Leaders of America and formerly Latin Club. 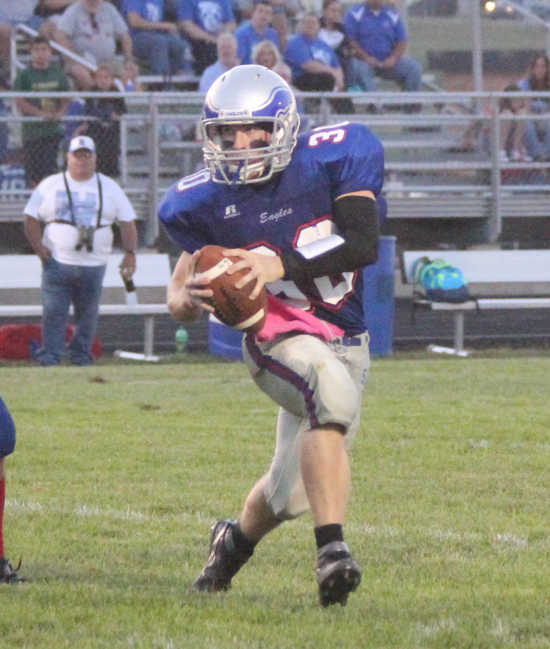 Banner Graphic: What is your training and practice schedule like?
Sawyer Arnold: We get one week off when school is over, then we go straight to football. Then every day for six days a week we practice. It's a long time, but I like it a lot. I prefer that portion of my day more than anything else.

BG: How long have you been playing football?
SA: Since second grade. I moved here from Greencastle and my dad told me and my brothers to start playing football. Since we didn't have soccer, we played football, and we both really enjoyed it.

BG: Have you always been a quarterback?
SA: No. (Coach Burgess) moved me to quarterback my eighth grade year. I was a running back every year, and a lineman in sixth grade since I was overweight. I'd always been a linebacker until they moved me to defensive backs when I started playing quarterback.

BG: Were you No. 30 growing up? How did you pick that number?
SA: I never picked it, coach gave it to me. ... I don't know how he picked 30. I had a choice to get rid of it, but I wouldn't. The last person to have No. 30 for South Putnam was Drew Christy*, and I felt like it was an honor to wear his number. Me and my brother both have a poster in our room of him and it was kind of an honor to wear the same number as him.

(*) Christy, a 2007 graduate, was a star running back for South Putnam before playing in college at Rose-Hulman. He was critically injured in a car accident in early 2008, suffering head injuries from which he is still recovering.

BG: What kinds of lessons have you learned from playing football?
SA: I've definitely learned how to be mature and handle different situations. Coaches have taught me responsibility, how to be respectful, and how to adjust to different situations, even in life. They teach us football, but they teach us more beyond football. They teach us what to do after high school, what we should do and how we should react; how to represent everybody in our family, our school and them.

BG: What about your teammates? What have they taught you?
SA: We all have roles in life and on the football team. If we need help, they're going to be there for us. Especially this year, there are going to be circumstances that we can't, as individuals, hold ourselves together. But there are 14 other seniors to lean on and help me through a lot.

BG: What are you plans after high school?
SA: I plan on going to Lincoln, an Indiana tech school to be a diesel mechanic, so I can have that. Then I'll take over at the family farm.