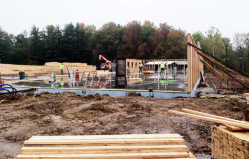 Courtesy Photo
The construction of the new $1.6 million dining hall at Camp Krietenstein near Poland will help the 100-year-old camp serve more than 200 Boy Scouts during the summer.

POLAND -- Community and Boy Scouts leaders gathered at Camp Krietenstein near Poland Thursday in celebration of the groundbreaking of a $1.6 million dining hall at the west-central Indiana Boy Scout facility.

The dining area, which will be double the size of the current dining hall, is set to be completed in spring of 2014. It should be ready to welcome campers by the start of the summer camping season.

The rural property was originally owned by George W. Krietenstein, a prominent Terre Haute businessman, who donated the land in his son's memory to the Boy Scouts of America to be used as a camp facility.

The construction project under way is being managed by Browning Construction, while Browning Day Mullins Dierdorf Architects is handling the design. Both firms are of Indianapolis.