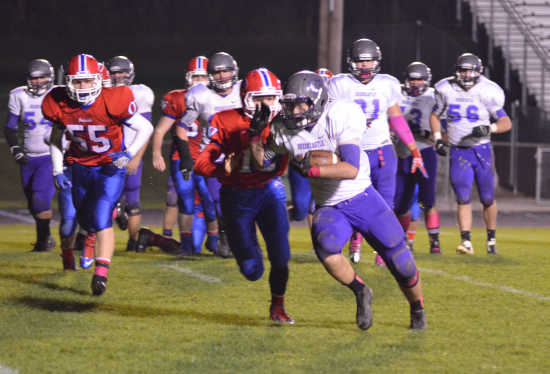 SPENCER -- While they weren't looking for an undefeated regular season as they had been last season, the Tiger Cubs still had a chance to accomplish a rare 8-1 season Friday night at Owen Valley.

Though it was not the prettiest night of football Greencastle produced this season, three second-half touchdowns were enough to propel the visitors over the Patriots 33-20.

"Owen Valley came out ready to play," Buis said. "It was senior night and they have a lot of guys that have played for coach (Duane) Potts for four years. He's got a great staff and they're a great football school.

"It was good to find a way to come down here, on their senior night, and find a way to win a grueling battle. The kids were hungry tonight. There's been a lot of football played at Greencastle but not many years has the program had a chance to go 8-1. They came out and finished strong."

Owen Valley got off to the best start possible with an 11-play drive that ended when Patriot quarterback Evan Wood went through the middle of the Greencastle defense for a 22-yard score.

Greencastle responded two drives later when senior Tyler Scott hit senior Seth Brown for a 6-yard strike to level the scores at 7-7 right at the end of the first quarter.

Both squads traded off possessions several times before junior Ryley Cook fumbled after catching a Scott pass. The hosts moved the ball quickly after Greencastle was called for a horse collar tackle and scored three plays later when Wood hit Seth Sparks for a 14-yard touchdown.

The Tiger Cubs responded within two minutes, following three plays of 10-plus yards. Senior Alec Pettit scored the first of his four touchdowns from a yard out to take a 14-13 lead.

Buis said having a lead at halftime was important from a mental standpoint.

"That was a big score," Buis said. "I told those guys that they're a good football team and as bad as we played in the first half, to still have the lead at halftime was a positive."

Greencastle came out of halftime firing and scored again five plays after the third quarter began. Brown and sophomore Brett Gierke picked up 65 yards through passes before Pettit slipped past the Patriot defense to increase the Greencastle lead to 20-13.

Buis said some halftime adjustments opened the game up for the Tiger Cubs.

"Owen Valley wasn't going to let us run the ball," Buis said. "We would have four receivers and they would keep the box loaded.

"We made some adjustments and drew some routes for Seth Brown. We got the ball to him, he got the chains moving and we got field position back in our favor. That was a key adjustment coach (Dave) Stephens made at halftime."

Brown finished with 13 catches for 213 yards. Scott threw for a season-best 370 yards.

Owen Valley responded with a 14-play drive that saw the hosts take three cracks from the Tiger Cub goal line, only to be rebuffed each time and miss a chance to score.

The Patriots leveled the score on the next drive, however. A fourth-and-one play from near midfield turned into a 55-yard touchdown run for Sparks that tied the game at 20 apiece.

Greencastle quickly charged downfield on Scott's arm and finished the drive with another Pettit touchdown from a yard out to retake the lead at 27-20.

After forcing a punt, the Tiger Cubs iced the game with another Pettit score, this time from 15 yards out to extend the lead to 33-20 with three minutes to play.

Even on an off running night, Buis said the squad found ways to score on the ground.

"When you get down close, you want to load the box, get a hat on a hat and the running back has to make someone miss," Buis said. "You can't block them all and Alec Pettit and Evan Coble did a good job finding seams."

Once Owen Valley turned the ball over on downs following the score, Greencastle got the first down needed to run out the clock and finish the regular season at 8-1.

With the regular season done, Greencastle has to quickly pivot for a road trip next week to Tri-West.

The Bruins, ranked No. 10 in Class 3A, present a stern challenge for the No. 12 Tiger Cubs. Buis said the squad regressed against Owen Valley but had the capability to right the ship for next week.

"Tri-West is a very good football program," Buis said. "They're well coached, well-conditioned and have a great quarterback in Jake Hendershot.

"We've got to improve and clean some things up. I thought, until this game, we were closing the gap on the better teams in the sectional. We've got a lot of work to put in this week to ensure we continue on in the playoffs." 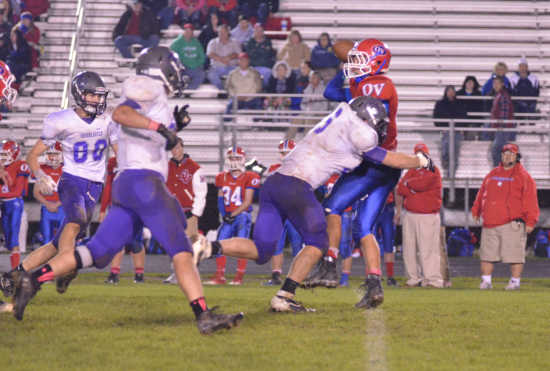 Greencastle senior Grant Mundy comes through the line for one of his two sacks against Owen Valley on Friday. (Banner Graphic/TRENT SCOTT)
Order this photo