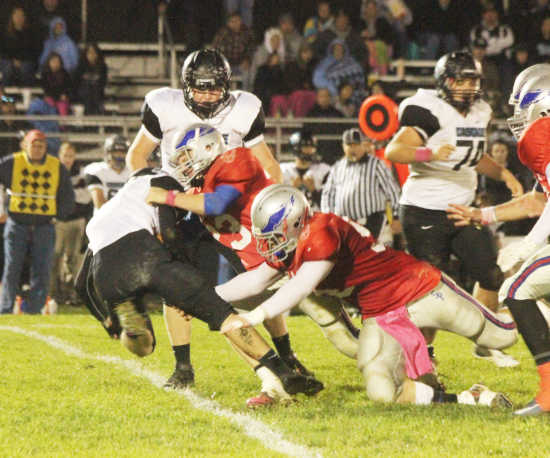 South Putnam senior Joe Waters levels the ball carrier with a big hit against Cascade on Friday, helping the Eagles shut out the Cadets and secure a perfect WCC record. (Banner Graphic/GRANT WIEMAN)

On Friday night the South Putnam football team looked to take sole possession of the 2013 West Central Conference championship, a feat they have not accomplished since 1999 when they were co-leaders with Speedway.

"It's very special," head coach Troy Burgess said. "We knew we won three but we were not sure if they all were co-champs or not. It's great to be compared to a team here back in the '80s and that's something.

"They have worked hard and they deserve this."

South Putnam took control of the game early and never looked back. After a quick three-and-out by the Cascade offense in the first possession of the game, the Eagles capitalized on the good field position and junior Lucas Lorian plowed over a linebacker on the way to a 56-yard touchdown run.

The Cadets drove down to the Eagles 30-yard line and after a one handed interception by senior Wes Riner, Lorian galloped 86 yards to glory to put the Eagles up 14-0.

The Eagles scored one more time in the first quarter when senior Braden Patrick rambled in from 5 yards out with 8.5 seconds left to give the Eagles a 21-0 lead.

South Putnam put another touchdown on the board in the second quarter. Senior Sawyer Arnold took it in from 2 yards out on the quarterback sneak with 4:44 left in the half to stretch the halftime score to 28-0. On the ensuing kickoff junior Zane Yon crushed the ball, which landed in the end zone on the fly for the touchback.

The first half was all Eagles, as the scoreboard showed. The Eagle defense was punishing and relentless and the offense was free-flowing and quick to gain yards. The South Putnam defense only allowed 80 yards to the Cadets and on offense it gained 245 yards.

Shortly after the second half began the Eagles added to their lead. Senior Joe Waters rambled in from 4 yards out for the next touchdown and six minutes later Lorian scored his third and the final touchdown of the game from 5 yards out to extend the lead to 42-0. 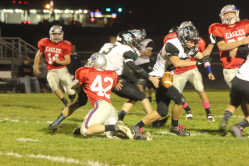 The defense was only tested on two Cadet drives. Both ended when senior Wes Riner leaped up and picked off passes inside the 15-yard line. The first was midway through the first quarter.

Riner read the pass perfectly and jumped over the Cadet receiver to make a one-handed interception and kept his feet inbounds. The next was with 4 minutes left in the game and Riner picked off what would have been a sure touchdown at the 5-yard line and the Eagles proceeded to run the clock out and secure their first outright WCC win.

Cascade seemed to want to throw the ball a lot on the night, but South Putnam seemed more than ready for it. Cascade quarterback Sawyer Donovan was just 9-26 with three interceptions. Burgess said he was satisfied with how the Eagles defended the pass.

"I thought it was great. We had three picks tonight. I thought our pressure on the quarterback was great. The kids did their jobs and that's what we have to do, we have to do our assignments and when we do that, we are pretty good," Burgess said. "I was very proud of our defense."

The Eagles had a very successful season, outscoring opponents 323-107 and pitching their third shutout of the year against Cascade. Also on the night Lorian had 258 yards rushing, which put him 299 yards away from the South Putnam single-season record.

"We are going to run the football, that's what we do," Burgess said. "I thought Sawyer threw the ball well tonight. We just did not need to throw a bunch tonight. I still believe to advance in the tournament you have to be able to run."

South Putnam will host Trinity Lutheran (4-4) next week in the first ever meeting between the two teams.

"It's a new season starting Monday with everyone 0-0," Burgess said. "We have a lot of momentum, we are on a nice win streak. I feel like we really came together tonight and played well.

"That's what you want to be doing right now, playing your best, and I think they are right now."

South Putnam senior Derrick Mitchell takes a carry on an end around and leaves the defenders diving in his wake in the third quarter on Friday. (Banner Graphic/GRANT WIEMAN)