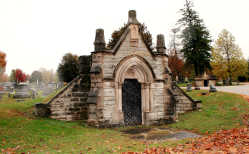 Historic aspects of Forest Hill Cemetery in Greencastle, such as the 1880 crypt on the west end of the cemetery, could lead to its inclusion on the National Register of Historic Places, preservation experts believe.

While the rarity of the towering Civil War Monument in Greencastle's Forest Hill Cemetery has spawned a local movement to have the limestone structure restored and saved for all eternity, the statue itself apparently isn't unique enough to warrant a spot on the National Register of Historic Places.

Members of the Putnam County Heritage Preservation Society (HPS), however, are hoping that the old Aristotle theory that the whole is greater than the sum of its parts holds true.

For a successful effort to have Forest Hill Cemetery enshrined on the National Register would be fortuitous in the ongoing effort to raise funds for the restoration of the 143-year-old monument within its boundaries.

At a recent meeting of preservation activists at the historic Sunny Hill home of Phil Gick on East Washington Street in Greencastle, the group learned that John Warner will research Forest Hill and complete the listing nomination for the cemetery's place on the National Register.

Warner, an Indianapolis contractor, successfully conducted background research and field studies for the HPS in 2012 on Greencastle's newest trio of historic residential districts prior to their applications being submitted to the National Register of Historic Places.

The HPS has agreed to a $3,250 contract with Warner (half of which will be funded by a Partners in Preservation grant). Target date for completion of Warner's Forest Hill study is December, Gick said.

Warner's contract also obligates him to a public presentation about his findings on the cemetery and its historic significance. He gave a similar public report on the residential districts in the spring of 2012.

While a visit to Forest Hill by representatives of the Division of Historic Preservation and Archeology (DHPA) didn't result in a favorable opinion of the Civil War monument gaining National Register status, those same officials suggested the cemetery, as a whole would be a good candidate, Gick told the group.

National Registry listing could then make both the cemetery and the monument eligible for some grants to further the process of restoring the 29-foot-tall monument that bears names of 321 Putnam County soldiers who perished in the Civil War.

DHPA officials, Gick noted, were intrigued by elements of the cemetery, such as crypts built into sides of the ravine, art deco-style mausoleums and abbeys, stone bridges that stretch across the ravine and the span of time the cemetery represents from Victorian-era architecture on top of the hill to more-modern examples surrounding it.

Of course, the cemetery is also known to be the final resting place of some notable individuals, none the least of which are Esther and Gustavus Lilly -- parents of Eli Lilly (who is not buried there although he spent a good deal of time here before and after the Civil War and opened his drugstore on the square in 1861) -- and Pearl Bryan, the victim of the 1896 murder in which her headless remains were discovered in Fort Thomas, Ky.

Bryan's headstone has long been removed from the scene because of vandalism. For years after the sensational murder and trial visitors would place a Lincoln penny on her grave so that on resurrection day she could be whole again. Today pennies are still being left heads up at the site.

Of course, before Forest Hill is ever added to the National Register, it will need state and federal approval, just as the three housing districts did.

While Warner is working on that aspect, engineer Fritz Herget of Arsee Engineers Inc. is putting together a written assessment of the Civil War Monument with engineering data about the statue that can provide the basis for hiring the services of a firm to do the necessary repairs.

A recent inspection, Gick explained, surprised even Arsee, who was adamant at an earlier presentation that the monument could not be hollow inside.

"Guess what?" Gick offered, "it's hollow inside. That could make if a little more difficult (to repair)."

The monument is actually a three-tiered structure with the bottom portion made of Indiana limestone from Oolitic in Lawrence County, while the upper section appears to be a variety of sandstone.

The center section of the monument -- titled "Western Soldier on Guard" and sculpted by Thomas David Jones (who essentially erected a twin monument in Pomeroy, Ohio) -- is made of Berea sandstone, quarried from a specific area of Ohio that no longer provides such material.

"The quarries that stone came out of have closed," Gick said, however, preservationists have identified some current quarries that apparently have the material still in stock.

There are other rarities associated with the monument. Its characteristic cavalry soldier figure is considered rare among Civil War period pieces. In fact, the Forest Hill monument is said to be the earliest Indiana example of a military figure appearing on a Civil War memorial.

"There is no other figure like him in the state," the website Sculptural Civil War Monuments in Indiana notes, referring to the noble figure as "the unusually seated cavalry soldier."

The soldier is considered a "faithful portrayal of a Civil War volunteer," according to documents from the dedication ceremony that took place July 2, 1870 before an estimated 8,000 people (an amazing number considering that at the time, fewer than half that many people actually lived in Greencastle).

The HSPS effort to save the historic monument has raised close to $30,000 thus far through a variety of sources. However, an informal estimate of the project puts the cost in the $75,000-$80,000 range.

"It won't be much less, it might be more," Gick suggested, using the recent Greencastle parking garage project estimates and actual bids -- in reality $1 million apart -- as an example of how varied results can get.

"We've made good progress," Gick said, encouraging the HPS members and others in attendance. "But we've got a long way to go ... that's the gist of it."