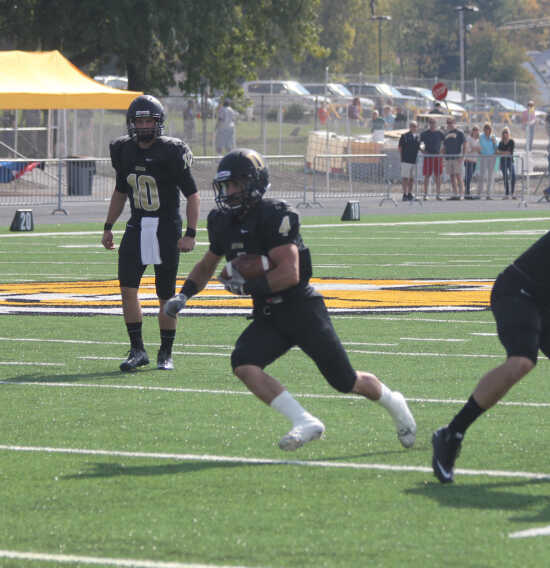 DePauw senior running back Nikko Sansone cuts through a hole in a game earlier this season while freshman quarterback Matt Hunt looks on. (Banner Graphic/GRANT WIEMAN)

The Tigers' comeback was a result of an efficient offense and tough defense as DePauw ran 24 fourth-quarter plays to the hosts' 10 and held the Battling Bishops to just 13 yards in the final stanza.

Nikko Sansone picked up 61 of his career-high 200 rushing yards on the final play of the third quarter and, two plays later, reached paydirt on a 1-yard run to trim the Bishops' lead to 21-17 with 14:11 left.

The DePauw defense executed a three-and-out series and the offense took over at the Ohio Wesleyan 45. A pair of third-down personal fouls by Ohio Wesleyan kept the drive alive and Malm nailed a 23-yard field goal with 9:10 left to make it 21-20.

Ohio Wesleyan picked up a first down on its next series before DePauw's defense stopped the hosts at their own 45. Following a short punt, the Tigers started their eventual game-winning series at their own 30 with 5:49 remaining. 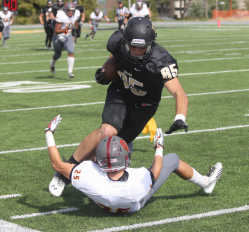 Matt Hunt connected with Barry Flynn for a pair of first downs before the Tigers were faced with fourth-and-one from the Battling Bishops' 36. Andrew Cusumano got the call and picked up the first with a 1-yard run.

Hunt and Connor Jeffers teamed for a third-down conversion with a 9-yard pass play before Hunt found Billy McClamroch for three yards to the Bishops' 20. The Tigers called a timeout and stopped the clock with 4.6 seconds left and the Bishops called one following that before Malm came on and hit a low line drive boot for the win.

For the third straight week, DePauw scored on its opening series with Flynn hauling in a 19-yard score from Hunt that capped an 11-play, 75-yard drive. The Tigers scored on their second series after taking over near midfield when Dennis Callicutt stopped Dave Mogilnicki for a 3-yard loss on a fourth-and-one pass play. Ten plays later, Malm's 30-yard field goal with 3:31 remaining in the quarter made it 10-0.

The Ohio Wesleyan offense, which had totaled just 42 yards in the opening quarter started moving the ball and picked up 176 yards in the second. Kevin Herman's 3-yard run early in the second closed the Tigers' lead to 10-7 and Calvin Cagney gave the Battling Bishops a 14-10 advantage on a 1-yard run with 7:57 remaining in the half.

Mason Espinosa teamed with Mogilnicki for a 59-yard score with 5:51 left in the half to make it 21-10. Later in the half, a DePauw linebacker forced Kevin Mulumba to fumble a short pass play and Nick Freund recovered for the Tigers at the DePauw 49 with 45 seconds left. The Tigers drove to the Ohio Wesleyan 13, but Hunt was intercepted in the end zone with four seconds left.

DePauw had another excellent scoring chance on its first possession of the second half, but Ohio Wesleyan recovered Cusumano's fumble in the end zone for a touchback.

Sansone's 200 rushing yards matched the third-highest total in school history and came on 39 carries, which is tied for second. Hunt completed 21-of-39 passes for 180 yards with a career-high 10 going to Flynn for 84 yards. Sansone totaled 273 all-purpose yards in the winning effort.

Espinosa completed 25 of 40 for 285 yards with six going to Scott Jenkins for 75 yards.

The Tigers return home to face Allegheny at 1 p.m. on Saturday, Oct. 26.