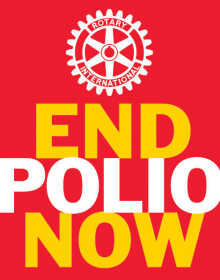 In honor of World Polio Day, which is widely recognized on Oct. 24, the Rotary Club of Greencastle is members will be wearing blue and yellow ribbons in recognition of Rotary's 27-year mission to eradicate the crippling childhood disease polio. The club has also pledged $1,040 toward the 2013-14 campaign.

On World Polio Day, Rotary International will also launch the "World's Biggest Commercial," an innovative, interactive campaign at endpolionow.org, that gives everyone a chance to join Archbishop Desmond Tutu, Bill Gates, Jackie Chan, Amanda Peet and other world figures and celebrities already participating in Rotary's "This Close" campaign (as in, "this close" to ending polio) in raising awareness and support for polio eradication.

Also on World Polio Day, Rotary will make available for purchase "End Polio Now," an eclectic album of songs performed by its celebrity polio eradication ambassadors from the music industry, including polio survivors Itzhak Perlman (classical violin); Donovan (folk rock); and Staff Benda Bilili (Congolese soukous). The album will be available via iTunes and at shop.rotary.org.

World Polio Day follows a succession of significant developments that were made in 2012 one of the most important years in the history of the polio eradication initiative.

* In January, Rotary announced it had raised more than $200 million in new money for polio eradication called for in a $355 million challenge grant from the Gates Foundation. The total is now $228 million and growing. In recognition of Rotary's effort, the Gates Foundation added another $50 million. Total funding package: $605+ million.

* In February, India was removed from the list of polio-endemic countries. Many health experts expected India to be polio's final stronghold, so the country's polio-free designation after a full year of no new cases represents a major milestone.

* In May, the World Health Assembly declared polio eradication to be a "programmatic emergency for global public health," in recognition of the dichotomy posed by the increased risk of failure due to the funding gap, opposite the significant progress represented by the reduction in cases and polio's shrinking geographical presence.

* On Sept. 27, in conjunction with a polio side event at the UN General Assembly, Rotary announced its plan to contribute $75 million over the next three years to the Global Polio Eradication Initiative (GPEI) as part of a worldwide effort to close a $700 million funding gap that threatens to derail the global health effort, even as new polio cases are at an all-time low.

The message to world leaders is clear: support the final push to achieve eradication now while the goal has never been closer or face the potential consequences of a new polio pandemic that could disable millions of children within a decade.

Since 1985, Rotary has contributed nearly $1.2 billion and countless volunteer hours to the protection of more than two billion children in 122 countries. The disease remains endemic in three countries -- Afghanistan, Nigeria and Pakistan -- although other countries remain at risk for imported cases.

To raise awareness and funds for the global push to end polio, other Rotary clubs worldwide are conducting activities surrounding World Polio Day including:

* A team of Rotary volunteers from a district in Taiwan and Korea will participate in the India National Immunization Day in Meerut, India.

* A group of Rotarians and community supporters from Victoria, Australia will gather for a photo in front of Parliament House in Canberra wearing red End Polio Now shirts.

A highly infectious disease, polio causes paralysis and is sometimes fatal. As there is no cure, the best protection is prevention. For as little as 60 cents worth of vaccine, a child can be protected against this crippling disease for life. After an international investment of more than US$9 billion, and the successful engagement of more than 200 countries and 20 million volunteers, polio could be the first human disease of the 21st century to be eradicated.

GPEI is spearheaded by the World Health Organization, Rotary International, the US Centers for Disease Control and Prevention (CDC) and the United Nations Children's Fund (UNICEF). It includes the support of governments and other private sector donors.

Rotary is a global humanitarian organization with more than 1.2 million members in 34,000 Rotary clubs in over 200 countries and geographical areas. Rotary members are men and women who are business, professional and community leaders with a shared commitment to make the world a better place through humanitarian service. To access broadcast quality video footage and still images of Rotary members immunizing children against polio available go to: Media Center.

For more information on how you can help or to obtain a ribbon contact Jenny Sullivan at Eitel's florist, 653-3171.