Tiger Cubs knocked out of sectional by Edgewood 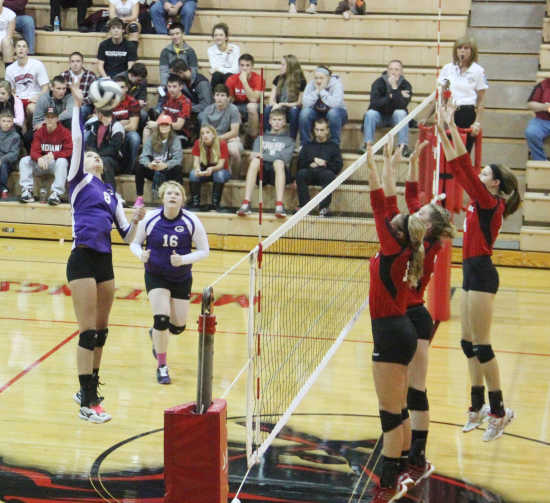 Greencastle junior Quinci Miller goes up for a kill attempt against Edgewood on Thursday as junior Jessica Lenihan (16) looks on. (Banner Graphic/GRANT WIEMAN)

ELLETTSVILLE -- The Greencastle volleyball team's high-flying, turnaround season came to an end on Thursday when the squad lost to host Edgewood in the sectional quarterfinal.

The Tiger Cubs showed only moderate improvements from the prior matchup between the two teams earlier this year, losing in the tournament match 25-22, 25-12, 25-17, but their coach said there is nothing to be disappointed about.

"I'm pleased with the season," GHS head coach Maggie Walters said. "They were happy to win more than five games this season."

Greencastle (17-13, 4-1 WCC) improved by leaps and bounds from last year, and even from the early part of this season, led mostly by its big leapers, juniors Olivia Divine and Quinci Miller.

The prolific pair gave the Greencastle offense a power punch to counter the jabs they'd been accustomed to.

Their play, particularly in the first set when the Tiger Cubs gave Edgewood its biggest scare, set a tone for the rest of the group.

Greencastle fell behind in the first set 8-1, but it battled back.

Divine had six kills in the set, ripping the ball crosscourt around the taller blockers of the Mustangs, and Miller pounded down two blocks.

The Tiger Cubs were beaten up badly at the net when the teams first met on Sept. 16, and they prepared for the past two weeks on a strategy to beat the Mustang blockers.

"We wanted to block them and to send our hits deep," Walters said. "When we did, we got kills. When we'd go to tipping, they picked it up every time, but when we hit the deep corners and deep middle we got our kills."

Senior Danielle Thomas gave Greencastle stability and put her serves deep and precise, leveling the playing field for the Tiger Cubs. She picked up six points in the set, including a run of four straight that helped GHS tie it up at 19-all.

From there, Edgewood stepped up. Senior setter Ashley Hacker closed out the set by getting above the net to tip a second-hit winner past the surprised Tiger Cubs.

Greencastle had little success in the second set, falling behind 15-3 and forcing just three serve-and-out possessions.

GHS went on a mini-run to start the third set, again led by Thomas, and started ahead 5-2.

Junior Jessica Lenihan emerged as an alternative to the Tiger Cubs pair of high-flyers, hitting from both the left and right outside and scoring four kills in the final set.

The Mustangs found a response with senior Vanessa Brown cheating up to pickoff crosscourt attacks.

With the set tied at 10-all, Hacker tore off six straight points to give Edgewood all of the cushion it needed.

"We had been working on serve receive, they just had good float serves that we're not used to seeing," Walters said. "That took us out of our serve receive a little bit."

The early exit from the playoffs was a disappointing end to the season for Greencastle, but the team's successes this year (finishing above .500, winning a county championship) weren't diminished by the sectional loss.

Thomas, the Tiger Cubs only senior, helped set a tone the team can repeat next year when expectations are higher.

"She rarely had a bad game, which is huge to see from your senior," Walters said, "She was our only senior and one of our captains and she played the roll very well." 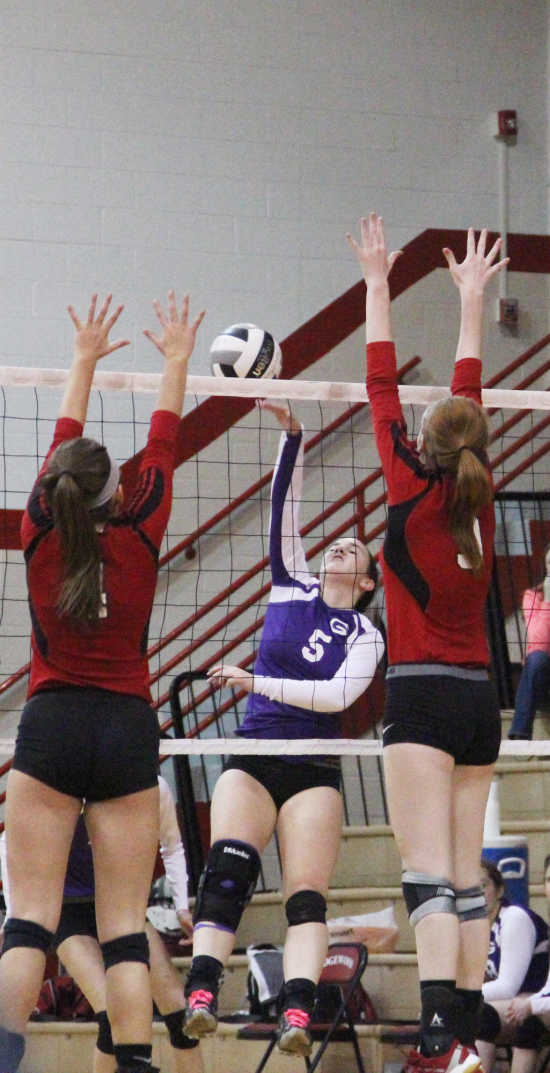